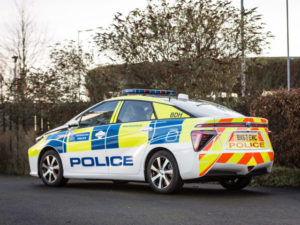 The Mirai will be put to use for both overt and covert responses, as well as general purposes, and offers a range of around 300 miles. They will have access to five hydrogen filling stations across the capital.

The vehicles are being funded with the help of grants from the Fuel Cells and Hydrogen Joint Undertaking (FCH JU) a public-private partnership between the European Commission, European industry and research organisations to accelerate the development and deployment of fuel cell and hydrogen technologies.

The vehicles build on the Met’s work since late 2015 to hybridise and electrify its fleet, following successful trials of the BMW i3 Rex. The police force is planning to procure 550 zero or ultra-low emission vehicles by 2020.

The news comes a month after attendees at a Vehicle Remarketing Association (VRA) meeting were told that hydrogen vehicles could buck the trend when it comes to depreciation.

Mark Roden, director of operations for Toyota GB, commented: “This is proof that organisations are seeing the future of hydrogen power for zero emission fleets.”