Mercedes is to launch an off-road version of the E-Class estate, featuring rugged styling, higher ground clearance and all-wheel drive. 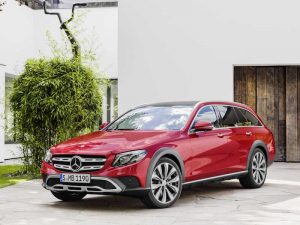 Set to rival models such as the new Volvo V90 Cross Country and Audi A6 allroad, the E-Class All-Terrain will make its world premiere at the Paris Motor Show next week and arrive in the UK from spring 2017.

Key features of the new model compared to the standard estate include an extra 29mm ground clearance, partly achieved by larger 19- and 20-inch alloy wheels with higher sidewalls along with an extra 15mm from the Air Body Control multi-chamber air suspension, which offers a choice of three suspension levels.

The All-Terrain will also come with 4matic all-wheel drive as standard and the Dynamic Select driving programme, which offers a choice of five driving programmes to alter engine, transmission, ESP and steering characteristics. This includes a bespoke setting for the All-Terrain driving programme – which is derived from the GLE and adjusts the thresholds for ESP, active yaw control and acceleration skid control (ASR).

Just one engine will be offered at launch: the newly developed four-cylinder 191bhp E 220 d 4MATIC offering emissions from 137g/km and official combined fuel economy from 55.4mpg along with a 0-62mph time of 8 seconds. A six-cylinder diesel will follow later, details of which have not been announced. Both will be equipped with the new 9G-TRONIC nine-speed automatic transmission as standard.

Trim level will be based on the Avantgarde line and will include the standard estate’s rear seat cargo position and a standard 40:20:40 split-folding rear seat back. Full specification and pricing details will be announced in early 2017.

Previous: Driverless cars to account for half of UK new car market in 25 years’ time
Next: University of Birmingham and Lex Autolease to co-pilot ix35 Fuel Cell in MPG Marathon