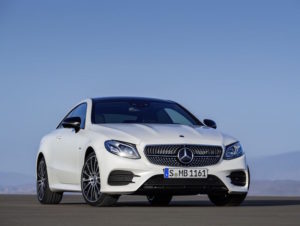 The fourth model in the E-Class line-up, the Coupé is based on the Saloon and is 123mm longer and 74mm wider than before while also bringing a wider and longer track, benefiting driving dynamics.

Connected services are carried over from the saloon and include the COMAND Online connectivity system, which wirelessly integrates the smartphone into the vehicle’s infotainment system.

Engine line-up at launch brings one diesel and three petrol engines, depending on market. The 191bhp 2.0-litre E 220 d diesel offers 106g/km and official combined fuel economy of 71mpg with a 0-62mph time of 7.4 seconds and top speed of 150mph.

Driver assistance technologies include Active Brake Assist as standard, which can warns the driver of an imminent collision, provide optimum support with emergency braking and, if necessary, also autonomously apply the brakes. It can also detect potential frontal collisions with pedestrians in slower-moving traffic.

Other highlights include the Drive Pilot technology semi-autonomous cruise control system which works at speeds up to 210kph (130mph) and the Remote Parking Pilot system that enables the vehicle to be moved into and out of garages and parking spaces remotely using a smartphone app.

UK pricing and specification will be announced later this month.