Mercedes’ new EQC electric SUV has become one of seven cars to score a five-star rating in the latest batch of Euro NCAP tests – alongside models including the Ford Focus and Škoda Kamiq. 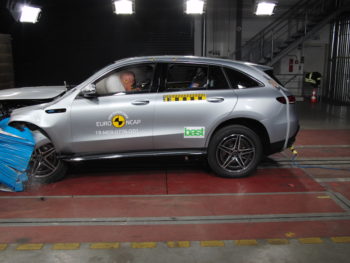 The results – which also herald SsangYong’s first five-star rating, in the form of the Korando, alongside five stars for the Mercedes-Benz CLA, Audi A1 and BMW Z4 – have been heralded as showing that carmakers are continuing to meet the challenge of rigorous car safety tests, including by being fitted with a range of key crash avoidance technologies. All the models tested come with standard-fit AEB, Speed Assistance and Lane Assist systems, although it was the A1 that came top when it comes to the Safety Assist score, with a figure of 80%.

Matthew Avery, director of insurance research at Thatcham Research and a board member of Euro NCAP, said: “2019 is shaping up to be one of the most consistent on record in terms of new car safety. All cars tested this year have been awarded five-star ratings, which is significant given the ever-increasing demands Euro NCAP places on carmakers.”

“It’s also notable that five-star ratings have been awarded to such an eclectic group, proving that good safety performance can be realised whatever the category or sticker price.”

Previous: Mazda CX-30 to bring 26-strong model line-up
Next: Less than a month to apply for 2019 Fleet Heroes Awards