Mercedes-Benz is to launch the first-ever A-Class saloon later this year, as part of plans to extend its popular small car line-up from five variants to eight. 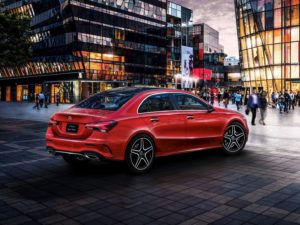 The A-Class Saloon was shown with an extended wheelbase for China.

It follows a record 2017 for the brand’s compact models – the outgoing A-Class and the B-Class, CLA, CLA Shooting Brake and GLA SUV collectively accounting for 620,000 units globally, with 60% of European customers coming from other brands.

The A-Class Saloon will get a global debut at the Auto China motor show in Beijing, as a version tailored towards the local market and built by joint venture partner BAIC Motor. This features a 6cm longer wheelbase than the new A-Class hatchback, in line with Chinese-market demands.

Mercedes-Benz said a version tailored to global markets will be unveiled and launched later this year, likely to be on the same, shorter wheelbase as the hatchback. This would give the A-Class a rival product for the A3 Saloon, particularly important for regions such as North America, but also relevant to Europe.

As yet, it’s unclear whether the A-Class Saloon will be sold alongside the CLA – a car Mercedes-Benz has marketed as a four-door coupe, and which features frameless windows that the more conventional four-door doesn’t get. Chinese specifications hint at standard and sport versions, the latter with powerdomes on the bonnet like the CLA and likely to be sold as AMG-Line in the UK.

The 1.33-litre petrol turbo engine from the new A-Class is also confirmed, with others to follow. Expect 1.5-litre and 2.0-litre four-cylinder diesels for European markets.

FIND OUT MORE: Discover how the new A-Class can fit your fleet’s needs at the Fleet Show 2018. Click here to register for free.