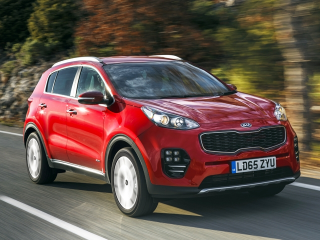 This year’s Show on 11 May will see a number of UK debuts in an impressive line-up of new models from the 21 vehicle manufacturers attending the event, with up to 300 models available for driving.

Fleet decision-makers will have a choice of three separate circuits of the world-famous Silverstone Grand Prix track on which to evaluate them, the National, International and Stowe circuits – plus a road route in the locality.

Amongst the stars of the Show seem certain to be the latest offerings from a resurgent Renault, including the new Megane which attracted so many headlines at the Geneva Motor Show last month when its Sports Tourer sibling was also premiered for the first time.

Renault will also have several examples of its best-selling ZOE electric car, plus a number of the Kadjar crossover, which shares the same platform as the Nissan Qashqai, for fleet decision-makers to evaluate.

Korean manufacturer, Kia Motors, which has strong fleet ambitions for this year, will be offering test drives of its new Sportage SUV and Optima saloon, along with a model line up that includes the Picanto city car, Rio supermini, Cee’d hatchback and sports wagon and Sorento SUV.

Meanwhile, Volvo will be providing fleet decision-makers with the opportunity for the first UK drives of the new 49g/km T8 Twin Engine plug-in hybrid version of the XC90 SUV.

As well as high performance, the XC90 T8 Twin Engine delivers incredible economy figures with CO2 emissions of 49g/km and a combined fuel economy figure of 134.5mpg. Fully charged, it can travel up to 26 miles on electric power.

Show director, Jerry Ramsdale, said: “We are delighted that so many vehicle manufacturers have chosen this year’s Fleet Show at Silverstone to showcase their very latest offerings for the UK fleet market.

“By coming to this year’s Show, visitors will have the chance to get behind the wheel of some of the newest models to hit the UK fleet market and try them out for themselves,” he added.

As always, the Fleet Show looks to strike a balance between interactive fleet education, test driving and a contemporary fleet exhibition which features some of the latest developments, products and services in the fleet arena.

On the education front, a new, Question Time-style interactive session will be led by industry experts and will tackle some of the leading fleet topics of the day, as well as addressing concerns from the floor.

The Silverstone Wing will again play host to a wide-ranging fleet exhibition in halls 1-3, boasting a diverse array of suppliers who will be demonstrating the latest developments, products and services in the fleet market.

There will also be plenty of opportunity for Show visitors to hold face-to-face meetings and network with exhibitors and other visitors alike.

This year, the audience will be audited by the Audit Bureau of Circulation (ABC) for the first time to give a clear and auditable record of the number of fleet decision-makers attending the event.

Registration for this year’s event is now open and details of how to register can be found here: http://thefleetshow.co.uk/visitors.