Cutting air quality pollution in Greater Manchester will require a clean air zone and workplace parking levy to go live in the next 12 months, with a range of follow-up actions, including a wider charging zone, necessary in the longer term. 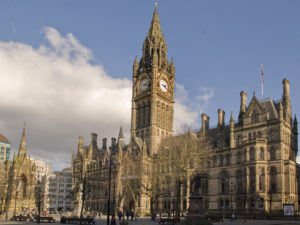 That’s the finding of a new report from IPPR North – a think-tank dedicated to the North of England – that points to Kings’ College London estimates that 1.6 million life years will be lost in Greater Manchester in the coming century due to its poisonous air; equivalent to each of us having our life expectancy reduced by six months.

The research also finds that air pollution in the city actually tops London’s in some respects; Greater Manchester has the highest rates of emergency admissions to hospital for asthma in the whole country.

Although a Low Emissions Strategy and an Air Quality Action Plan for Greater Manchester have identified a wide range of activities to address air quality problems, including measures to reduce congestion, encourage EVs and the use of public transport, and make changes to the bus and local authority vehicle fleet, the IPPR North analysis suggests the measures are unlikely to reduce NO2 emissions sufficiently. It also says that unlike London, Greater Manchester lacks the strategies and a system to tackle air pollution.

With the clear objective of achieving legal compliance by 2020, the report calls on the mayor to speed up the introduction of already planned measures and introduce a charging zone for buses and HGVs and a workplace parking levy scheme – already being mulled by the Transport for Greater Manchester (TfGM) – by June 2019. It also says this must be followed up with the introduction of a wider Class D Charging Clean Air Zone – also covering cars and vans – and a workplace parking levy with a view to reducing emissions by at least 40% across the city.

Other primary measures mooted in the report encompass a vehicle retrofit and replace programme, including for public sector vehicle fleets and potentially covering such sub-contractors too, and incentivising EVs, including through a diesel scrappage scheme and deploying EV car clubs and increased charging infrastructure.

The report also says the Greater Manchester mayor – together with the mayors of Birmingham, Liverpool, London and other city leaders – should call on the government to provide a new devolution deal on air quality as part of a more generous Clean Air Fund, a national diesel scrappage scheme and a more robust framework for monitoring the impacts of air pollution. And it also recommends that the mayor establishes a Clean Air Taskforce, with representation from public services, business, civil society and citizens.

The authors conclude: “Our own government knows that the air we breathe is dangerous, but not enough is being done to raise awareness of this or to tackle it with sufficient urgency. We don’t think this is good enough for us or for our own children. We think people in Greater Manchester deserve better, and we think the institutions that govern us – both locally and nationally – can do more. We hope that this report can be part of inspiring them to act.”

“While the UK Government continues to drag its feet over its legal and moral duty to meet legal limits of air pollution in the shortest time possible, it is essential that local and regional leaders, including the Mayor of Greater Manchester, do everything they can to protect people’s right to breathe clean air.”