By Natalie Middleton / 5 months ago / Latest News, Today in Fleet / No Comments

A partnership between Pod Point, Volkswagen and Tesco that will install 2,400 charging points across 600 stores in the UK has hit a major milestone. 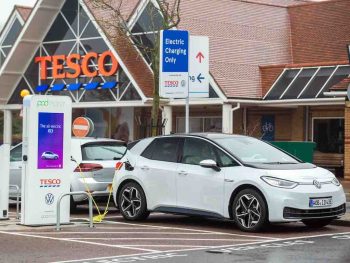 Announced in November 2018, the charge points are being supplied, operated and maintained by Pod Point under a partnership with Tesco and Volkswagen, and will include free-to-use 7kW media chargers, with the capability to display advertising on a screen, as well as 50kW rapid chargers which will be “priced in line with market rates”.

The nationwide rollout has reached the 200th store milestone following the installation of four free-to-use 7kW charging bays at the Tesco Superstore in Chester.

The Tesco Chester install marks the 402nd charging point installed to date as part of the rollout. At least two charging points (equivalent to four charging bays) are installed per store location.

Since the rollout began in 2019, over 669 MWh of energy has powered customers’ vehicles which has been calculated as the equivalent to saving 374,391 kg of CO2 tailpipe emissions, the amount produced by around 245 petrol cars driven over one year.

The rollout is rapidly expanding the UK public charging network and is tackling a number of locations with limited charging facilities (less than 10 chargers per 100,000) such as in Barnsley, Wirral and Wellingborough as well as previous ‘notspots’ (areas without a single public place to charge) such as Barrow-in-Furness, which now has two public charging points located at the town’s Tesco Extra store.

Sarah Cox, head of marketing for Volkswagen UK, said: “It’s fantastic that we’ve reached another milestone in our partnership with Tesco and Pod Point, there are now 200 stores with chargers that drivers of any electric vehicle can use for free.

“As the partnership continues, and more stores roll out new chargers, we are really proud to be breaking down barriers to EV ownership and demonstrating to people that living with an EV is easy.”