A consultation has opened on latest plans for the Lower Thames Crossing, which is expected to bring major benefits to drivers in the area. 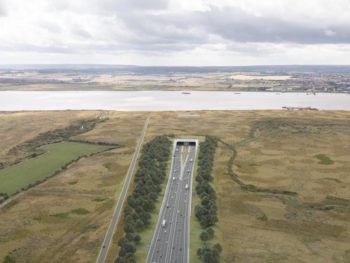 The plans include a 2.4 mile-long tunnel under the Thames between Gravesend and Tilbury

The route would link the A2 east of Gravesend to the M25 and is expected to unlock an additional 90% of road capacity, while reducing traffic at Dartford by 22% with some 14 million fewer vehicles using it every year, bringing faster crossings.

The updated plans released by Highways England today are said to mark the most ambitious road project since the M25 opened 30 years ago and will create a new, three-lane dual carriageway connecting the M2 near Rochester and the M25 in Essex between North and South Ockenden. This would include a 2.4 mile-long tunnel under the Thames between Gravesend and Tilbury – said to be the longest road tunnel in the UK and the third largest bored tunnel in the world.

The latest designs for the improvements take into account concerns over impact on local communities. A 10-week consultation opens today and runs until Thursday 20 December.

Environmental groups have opposed the plans but motoring organisations and haulier groups have lent their support, including the Freight Transport Association (FTA), which has urged the Government to press ahead with construction of the scheme as soon as possible to ease congestion and improve road capacity in this area.

Malcolm Bingham, FTA’s Head of Road Network Policy, said: “Traffic congestion at the Dartford Crossing is already unbearably high and it is predicted to return to pre-Dart Charge levels by 2020. The M2 / M25 route is a vital cog in the country’s freight machine and it must continue to work as smoothly as possible to ensure that British companies can trade without delays both domestically and internationally.”