London to get Paris-style electric car sharing scheme next year 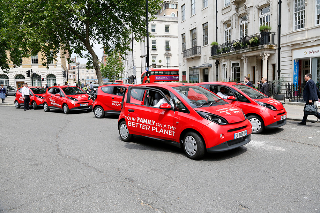 BluePoint London, part of the Bolloré Group, acquired the Source London scheme in September 2014, and has spent the months since addressing its poor record for reliability – £10m has been invested in a back-office system to monitor the network, and the network is now growing.

These will underpin the car sharing programme, BlueCity, which will mimic Bolloré's Autolib service in Paris and provide low-cost electric vehicle access to supplement public transport, booked via a web portal or smartphone app. The vehicles, painted red to match London buses, can be left in any dedicated bay around the city, where they are also charged.

“London should be even more electric vehicle orientated than Paris – it should be the leading city in Europe,” said group director, Cédric Bolloré. “We want to give the citizens of London an easy way to use non-polluting form of transport. Autolib appeals to public transport customers who occasionally need to use their own car – one Autolib car takes nine cars off the street according to our studies.”

Christophe Arnaud, managing director of BluePoint London, sees Oyster compatibility as a longer-term possibility: “It took some time in Paris, it’s not that simple to merge the systems but it will happen,” he said. “It will be discussed once we deploy enough cars. Paris is big enough to see cars everywhere, it’s big enough to negotiate that. If there are only 50-100 cars in London, it’s not big enough to negotiate with Transport for London. It’s something we’re trying to do in Paris, and our aim in London too.”