By Jonathan Musk / 3 months ago / Latest News / No Comments

200 kerbside charge points are to be installed across Brent and Camden to bring electric charging to those without driveways and garages. 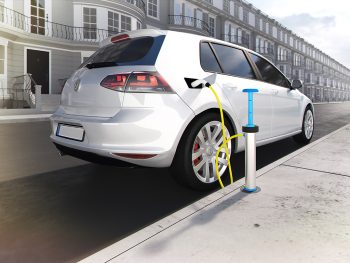 The charge points will be installed by Trojan Energy, and have a flat and flush connection meaning their on-street footprint is very low.

The Subsurface Technology for Electric Pathways (STEP) project has been awarded £3m in co-funding by Innovate UK.

The technology consists of 2 parts – a charge point slotted into the ground, and a ‘lance’ which is inserted into the charge point in order to charge. The charger can provide charge rates from 2kW to 22kW, and up to 18 chargers can run in parallel from one electricity network connection.

The technology is also said to work both ways, with EV drivers potentially able to plug-in and get a return on energy they provide from their vehicle back to the grid.

Both boroughs have rapidly growing EV usage, encouraged by council policy determined to drive down air pollution in their neighbourhoods. Cllr Shama Tatler, lead member for regeneration, property and planning at London Borough of Brent, said: “Electric vehicles will play an important part in improving our local air quality, which we know can have a detrimental impact on people’s health. I hope these discreet kerbside chargers will make electric vehicles accessible for more people and get us one step closer to our aim of becoming a zero carbon borough.”

The technology has been developed by Trojan Energy; a team of ex-oil industry engineers using their subsea skills to contribute towards solving the emissions problem.

Trojan Energy managing director, Ian Mackenzie said: “We are grateful for the support we have received from our consortium partners and Innovate UK. This backing will allow us to bring our discreet kerbside charging to cities where the need to transition to EVs is greatest. Our technology will allow us to electrify whole streets at a fraction of the cost of traditional charging infrastructure and without the need for kerbside clutter.

“We are really looking forward to the challenge of bringing this revolutionary new solution to London and beyond”.

Element Energy, a strategic energy consultancy specialising in the analysis of low carbon energy, are leading the project. Element Energy will be guiding the project using their sectoral and project management expertise, to achieve the best commercial and environmental return for investment.

Celine Cluzel, Element Energy director, said: “STEP is trialling a solution to what is often the Achilles’ heel of charging infrastructure: scalability. The project is also conducting research on consumer and wider street users’ preference – a typical gap in research so far.

“These facts, combined with the excellent team brought together, make us confident that the trial will be a significant step forward for the uptake of electric vehicles.”

Other members of the consortium include UK Power Networks, Birmingham City Council and the University of Leeds. Award winning renewable electricity supplier Octopus Energy will also be recruiting their customers for the trial and providing expertise in backend billing, which will be invaluable to EV owners.

A key aspect of the trial involves collecting consumer feedback on the technology and gathering new information on the charging behaviour of EV drivers who park on-street. This research will be led by the Institute for Transport Studies at the University of Leeds, who are a world-renowned research establishment, alongside input from Element Energy who have previous experience of conducting EV trials. Feedback from this research will crucially inform the development of commercialisation plans.