A new survey has revealed that London’s T-Charge may be succeeding in pushing motorists to public transport. 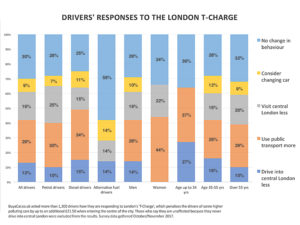 Public transport pressure may increase with introduction of T-Charge

The results of a survey conducted by BuyaCar.co.uk found that of those who travel to London regularly, many have already switched to public transport in lieu of paying the T-Charge.

In stark contrast, 58% of alternative fuel drivers said they won’t change their behaviour toward travel, compared to just 28% of petrol and 25% of diesel drivers.

Younger generations up to 34 years old showed more willingness to change habits too, with 44% saying they’ll use public transport more, compared to 26% of 35-55 year olds and 29% of over 55s.

Strangely, alternative fuel vehicle drivers were the most likely to change their vehicle, with 14% of respondents compared to 11% of diesel drivers and 7% of petrol drivers.

The survey asked more than 1,300 motorists how they are responding to the new anti-pollution charges. London’s T-Charge will be replaced by an Ultra Low Emissions Zone in 2019.

However, with a shift in people moving to use public transport, some predict the additional strain on public transport could be too much for an already struggling network.

Austin Collins, managing director of London-based BuyaCar.co.uk, said: “Everyone wants to enjoy cleaner air in our cities but our findings show that financial penalties on the drivers of higher polluting vehicles potentially spell problems elsewhere.

“For example, some people might visit the centre of London less, or even stop coming altogether and with public transport already under a lot of strain at the best of times, the prospect of more drivers switching onto buses and trains spells more pressure still.”

Suggestions for alternative anti air-pollution schemes could work, according to Collins, who added, “Scrappage schemes have proved successful in the past for helping remove the dirtiest vehicles from our roads. A comprehensive approach to tackling pollution should perhaps also ensure that drivers of older vehicles, who may not have the funds for a replacement, receive support so that they can upgrade to a newer and cleaner model.”