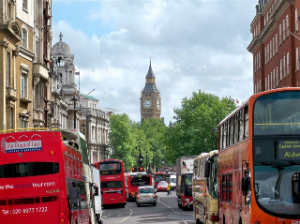 Plans to battle the capital’s ‘toxic air’, including a £10 charge for the most polluting vehicles, the extension and early introduction of the Ultra-Low Emission Zone and a national diesel scrappage scheme have been put out for public consultation by London Mayor Sadiq Khan.

The major public consultation has been launched today (5 July) on the 60th anniversary of the Clean Air Act to help end London’s ‘public health emergency’.

The changes would see the implementation of a £10 Emissions Surcharge (dubbed the ‘T-charge’) on the most polluting vehicles entering central London from 2017. The charge would apply to all vehicles with pre-Euro 4 emission standards and would cost an extra £10 per day on top of the existing Congestion Charge.Mr Khan is also proposing introducing the central London Ultra-Low Emission Zone one year earlier in 2019 and then extending the zone beyond central London from 2020: for motorcycles, cars and vans, to the North and South Circular; and for lorries, buses and coaches London-wide.

The plans also include developing a detailed proposal for a national diesel scrappage scheme for the Government to implement.

The Mayor added that the scheme would be the toughest crackdown on the most polluting vehicles by any major city around the world.

Mr Khan said: “With nearly 10,000 people dying early every year in London due to exposure to air pollution, cleaning up London’s toxic air is now an issue of life and death.

“The scale of the failure to tackle the problem is demonstrated by the failure of the Government and the previous Mayor to meet legal pollution limits. Urgent action is now needed to ensure Londoners no longer have to fear the very air we breathe.”The plans have previously been met with some concern from the BVRLA, in particular the changes to the ULEZ.

Commenting at the time of their first announcement, chief executive Gerry Keaney said: “These last minute adjustments to the ULEZ scheme would not give businesses time to prepare and could punish a large number of companies who have already planned their vehicle requirements based on the scheduled 2020 introduction date. It took years of planning, research and consultation to come up with the current ULEZ proposals and rushing through with any changes could have major unforeseen repercussions.”

Keaney also said of the scrappage scheme: “We believe a diesel scrappage scheme is a blunt instrument for improving air quality – there needs to be thought put into this scheme. Motorists should be encouraged to use vehicles as and when they need them – rather than just being given £2,000 to buy a new vehicle, they could be given vouchers for car clubs. Any air quality plan should also look at encouraging uptake of ultra low emission plug in vehicles with a range of in-life incentives, such as free parking or use of bus lanes.”

Keaney concluded: “Air quality is vitally important, but we also need to ensure that people can afford to live and work in London.”

The public have until Friday 29 July 2016 to feed back on the first round of the consultation, with further more detailed consultation to take place later this year.

To view the consultation, visit www.london.gov.uk/cleanair