Liberty on track to go all-electric ahead of government deadlines

Property services business Liberty has said its vehicle fleet will go all-electric earlier than government deadlines as part of the firm’s wider commitment to becoming carbon-neutral. 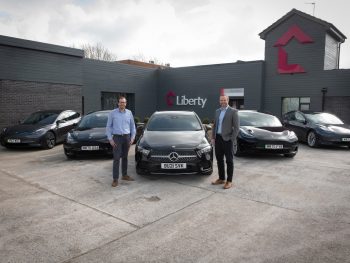 The business runs a 40-strong passenger car fleet of which eight cars are already fully electric while a further 29 are plug-in-hybrid, hybrid or mild hybrids; there are only three conventionally fuelled cars left in the fleet and these will soon be replaced. Its choice list now only includes all-electric, plug-in-hybrid and other electrified models.

Liberty is also taking action on its 700-strong van fleet and will include more electric vans from 2023 as prices come down and load-carrying abilities increase.

It’s also participating in Leeds City Council and Highways England’s electric vehicle trials to test out all-electric vans and to trial them with staff who drive shorter distances or who carry light loads in their vehicles as part of their daily role.

The work forms part of its goal of having carbon-neutral offices by 2030 and for the full business to be carbon-neutral ahead of the Government’s 2050 target.

Sam Greenwood, head of fleet at Liberty, said: “We’re making great strides towards this but are ensuring we take our time and get it right.

“Partnering with Lombard has helped us get a real handle on the lifetime cost of electric vehicles, giving us the confidence to know that all-electric cars work for us today, and that cost-effective all-electric vans aren’t far away either.

“The feedback from staff on the new vehicles has also been really positive and we’re working together towards our target of making the fleet all-electric.”