Lexus has issued an image of its latest concept vehicle, the UX, ahead of its debut at the Paris Motor Show. 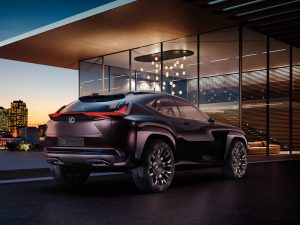 The new Lexus UX Concept is aimed at urban drivers

The new concept has been created at Lexus’s European Design Centre, ED2, and shows the brand’s take on an urban SUV.

The concept could hint at a possible new model for the brand to sit under the NX crossover. Lexus said the model is “designed to appeal to a progressive, urban audience living in a connected environment”.

It added that the concept “showcases imaginative technologies for an immersive driver experience, while the interior combines traditional craftsmanship with high-tech manufacturing techniques”. No powertrain details have been revealed.

At the Paris Motor Show, Lexus will also offer the refreshed IS saloon, marking its first European reveal, as well as the new NX Sport Edition and the new LC flagship coupe.

Previous: Q2 vehicle registrations back to 2003 levels
Next: Insurance policies should cover manual and automated driving, say ABI and Thatcham