Lexus has announced more details of its UX Concept urban SUV, which premieres at next week’s Paris Motor Show. 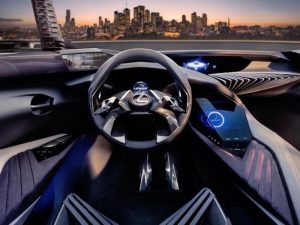 Following its preview of the exterior for the new model, which is believed to preview a new crossover to sit under the NX, Lexus has now published an image of the cabin. This is intended to bring a “radical immersive 3D driving experience” across the onboard Human Machine Interface (HMI) technology.

The centre point is a crystal-shaped box in the centre console that provides a hologram-style display of air-conditioning and infotainment information. A hologram is also used for the globe-shaped display in the driver’s instrument  binnacle that will provide driver information via analogue and digital display.

The UX Concept also features electro-chromatic windows and e-mirror camera housings instead of traditional wing mirrors. The concept also has a demountable sound bar built into the passenger side of the dashboard.

“Our brief was to create a new genre of compact crossover; a vehicle that could create something unique from a customer’s point of view – an innovative, three-dimensional, fully immersive user experience,” said Stephan Rasmussen, designer at the Lexus European Design Centre, ED2.