Although the new E-Class has received a five-star Euro NCAP rating, Mercedes-Benz has missed an opportunity to promote advanced safety features as standard, according to Thatcham Research. 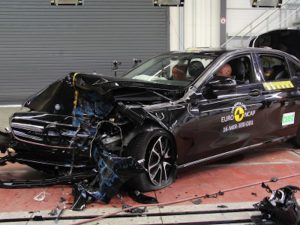 Safety experts at the organisation point out that the E-Class was recognised for its ‘Drive Pilot’ Assisted Driving system as well as Active Lane Keep Assist and Autonomous Emergency Braking, which is included as standard, but added that the majority of other safety features are only available as optional extras.

“The E-Class is head and shoulders above the competition when it comes to advanced safety features. However, we know that the take up of optional safety features is typically less than 10%, so more needs to be done in terms of standard fitment to make these superb technologies more widely accessible,” said director of research Matthew Avery.

Thatcham Research also highlighted the current gulf in safety standards in different parts of the world, pointing to recent safety test results from Global NCAP in India and Latin America.

India’s ‘car of the year’, the Renault Kwid, continues to be offered without any airbags on the standard version, scoring zero stars for adult occupant protection as a result. The same was true of the Honda Mobilio, which also scored no stars. Tests carried out in Latin America revealed that the Chevrolet Spark GT fared no better, with zero stars for adult or child protection.

In response Thatcham Research says safety should not come with a price tag.

Chief executive Peter Shaw commented: “Airbags save lives by making vehicles safer and it simply is not acceptable that cars sold at very similar price points in different countries bring varying levels of safety – or more worryingly, no safety at all,” he said.

Speaking about the results in India, Secretary-General of Global NCAP, David Ward said: “Renault and Honda make safe cars in other markets; they have the know-how to make all their Indian cars much safer. We expect them to start doing so now.”