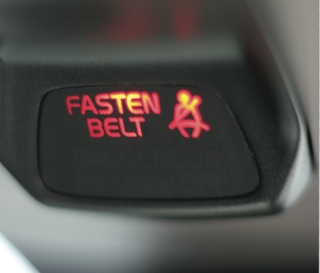 The figures from the DfT find that in 2014, 1.6% of all drivers in England and Scotland were observed using a hand-held mobile phone whilst driving.

A higher proportion of drivers in England and Scotland were observed using a hand-held mobile phone when stationary (2.3%) than in moving traffic (1.6%).

The proportion of car drivers observed using a hand-held mobile phone in England in 2014 (1.5%) was relatively unchanged from the 1.4% observed in 2009, when the previous survey was carried out.

Seat belt wearing rates were lower for other car occupants compared to car drivers. 96.7% of all front seat passengers and 90.6% of all rear seat passengers were observed using seat belts or child restraints in England and Scotland.

Commenting on the release of the DfT study into mobile phone and seat belt use, Professor Stephen Glaister, director of the RAC Foundation, said: ‘These figures are a worry. In 2013 the use of a mobile at the wheel was a factor in 22 fatal accidents and this is likely to be underreporting of the true figure.

‘Research for us shows that texting whilst driving impairs reactions more than being at the drink drive limit.

‘The disproportionate number of van drivers using mobiles appears to highlight the time pressures many are under and their likely use of mobile devices to check pick up and drop off destinations.

‘The big concern is that with more and more technological and visual distractions in our lives and in our cars the risks will increase.

‘The study also shows a persistent minority of people still not wearing seat belts. The consequences can be lethal. A fifth of car occupants who died on Britain’s roads in 2013 had not belted up. It is particularly worrying that the proportion of children wearing belts has dropped as this could be a reflection of parental behaviour.’

Neil Greig, IAM director of policy and research, added: ‘The results are very disappointing but not at all surprising. Campaigners routinely talk about the inherent dangers of the distraction caused by mobile phone usage, but drivers never believe they will be caught.

‘Campaigns run by THINK! and the Department for Transport need to be revived and invigorated with stronger messages for new drivers and van users. Mobile phone usage at the wheel can kill – there’s no two ways about it.’

He conclued: ‘Tackling mobile phone usage must be a government priority for 2015. People must have the fear of being caught increased as we believe this is the only viable deterrent, but that needs an increase in visible policing.’

Previous: New VW Touran to bring increased economy & space
Next: Drivers in favour of "Idiot behind the wheel" detection scheme