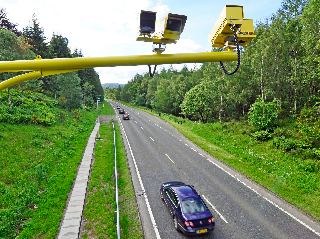 The latest quarterly report published by the group, which was set up by Transport Scotland in July 2012, covers the first 15 months of camera operation until the end of January 16 and finds that since their introduction there has been “sustained improvements in driver behaviour and a corresponding fall in collisions and casualties as well as additional benefits brought through reduced incidents and their subsequent impact, which has improved journey time reliability”.

The headline figures indicate that road deaths have fallen 30% and the number of people seriously injured is down over 70% over the 15 months studied.

Chairman of the A9 Safety Group Stewart Leggett said: “The A9’s improved road safety performance continues as the latest figures show the majority of drivers continue to respect the speed limits.

“Today’s results confirm the A9 is a safer place now than it was before the A9 Safety Group began its work.

“Fewer incidents are disrupting traffic and along this key route and these improvements have been delivered against a background of increasing traffic volumes and improved journey time reliability.”