The majority of drivers think the removal of the hard shoulder on ‘smart’ motorways has made them more dangerous, research by the AA finds. 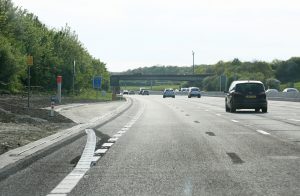 Highways England has reported a problem of drivers, in particular foreign trucks, parking in Emergency Rescue Areas when it is not an emergency

With work currently underway or planned on a number of smart motorway schemes, the AA survey of 20,845 drivers found eight out of 10 think that axing the hard shoulder has made motorways more dangerous than four years.

In particular, the use of Emergency Refuge Areas (ERA) is a key concern. Current guidance from Highways England is that such areas should be no more than 2.6km apart (approx. 1.5 miles) but road safety experts have called for a rethink on this – the AA says it would like to see at least twice as many lay-bys and they should be twice the length.

The organisation adds that if a car breaks down without sight of a lay-by it is likely to stop in a live running lane where it will be at increased risk of being hit from behind while if an HGV is parked up in the lay-by it makes it almost impossible for a car to safely enter the lay-by.

A driver was spotted on the M3 all lane running roadworks section last week trying to change a tyre in a live running lane. No advance warning was given.

The AA has raised concerns over SMART motorway safety in a recent letter to the new Transport Secretary, Chris Grayling MP and has also previously raised the issue with the Road Safety Minister, Highways England CEO and the Transport Select Committee.

Edmund King OBE, AA president, said: “Whilst we support measures to improve motorway capacity, we do not think that safety should be compromised. We do not accept that the current criteria of an Emergency Refuge Area or exit at least every 2.6km is safe.

“Breaking down in a live running lane with trucks thundering up behind you is every driver’s worst nightmare. The official advice is to dial 999 which just shows how dangerous the situation can be.

“If drivers can see the next lay-by, they are much more likely to make it to the relative safety of that area even if their car has a puncture or is overheating. If they can’t see the lay-by, they often panic and stop in a live running lane. If more lay-bys are designed at the planning stage it will be less expensive and safer.”