Land Rover Discovery Sport gets thumbs up from Thatcham for What Car? Safe Car of the Year 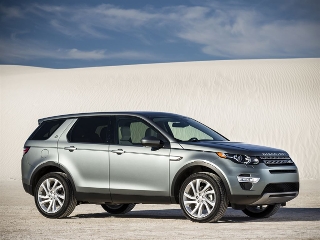 The organisation said that today’s pick of the cars new to the UK market show that safety has well-and-truly shed its staid image, with desirable makes and models at a range of prices and formats to suit company and private buyers, singletons and families of all sizes, surfers,  campers and city slickers.

More than a dozen cars caught the eye of a panel of safety experts led by Thatcham Research, with Matthew Avery, director of safety at Thatcham Research Centre, saying: ‘Over the last 50 years, the primary safety focus of vehicle manufacturers has been in protecting the occupant of the car. The introduction of technology such as seatbelts, air bags and the innovative use of strong materials in body construction have contributed to huge advances in this area, and we are increasingly seeing higher levels of safety incorporated as standard.

‘Even this time next year, we expect to see more widespread fitting of sophisticated AEB systems which, if adopted by the fleet market, will contribute significantly to cutting crashes, injuries and death on our roads.’

To reach the Thatcham shortlist, vehicles must have five Euro NCAP stars, come fitted with AEB, and be available to buy in the UK this year. To arrive at a top three, judges also assessed contenders against a number of stringent safety factors including protection for adults and children inside the car, and additional safety innovations such as new collision avoidance technologies.

Thatcham added that the Land Rover Discovery Sport was the overall award winner, achieving the best overall Euro NCAP score of the year, and also topped the small off-road category. It features standard fit Autonomous Emergency Braking (AEB) across the range.  With its seven seats, this vehicle offers great safety for all the family whilst an external pedestrian airbag – unique in its class and one of only two available in the world – offers additional protection to pedestrians, cyclists and other vulnerable road users on the outside.

In addition to the Discovery Sport, other small off-roaders catching the Thatcham eye include the Mercedes-Benz GLA-Class; Nissan X Trail; Jeep Renegade; and Lexus NX.

A manufacturer clearly committed to active and passive safety, the Nissan Qashqai scored the highest in this category and second place overall. This is sixth among the top 10 sellers in the UK, and over 70 per cent of new Nissan Qashqais on the road have AEB, adding significantly to the volume of cars on the road with crash prevention technology.

A popular fleet car category for those with or without families, the VW Passat topped this group and was placed overall third.  Thatcham praises its range of innovative safety systems on top of standard fit AEB available on the majority of the range.  In addition, the Passat offers a superior next-generation AEB system as an option, which will become standard in future, as well as post-crash automatic braking to avoid knock-on crashes.

Also in this category are Mercedes-Benz C-Class; Subaru Outback; and the ever-popular Ford Mondeo.

According to Matthew Avery: ‘Subaru has a history of very high levels of passive safety, fitting such innovations as stereo camera systems as standard since the early 2000s. Ford Mondeo deserves special mention for its rear-seat inflatable airbags – a revolutionary solution that helps avoid abdominal and chest injuries in the event of a crash, particularly among more frail passengers.’

Many other superminis gain four stars, but the Skoda Fabia alone has a five-star safety rating. It also scooped the overall What Car? Car of the Year award for its excellent space, economical engine, impressive visibility and safety equipment for a competitive price.

‘With the Fabia, Skoda is really democratising safety,’ said Avery. ‘It is no longer the preserve of the luxury market, and here is a keenly priced supermini with the levels of safety equipment that all fleet car buyers should come to demand.’