Kia has revealed more details for its forthcoming Stonic compact crossover, which will rival models such as the Nissan Juke and Renault Captur. 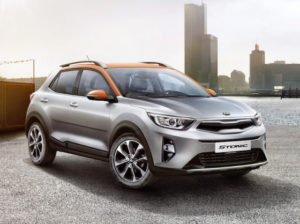 Due for launch in Q3, the Stonic is likely to become one of Kia’s best-selling cars.

Due on sale in Europe during Q3 2017, the Stonic will enter a hotly contested sector that accounts for around 7% of the European new car sales market and is predicted by Kia to become one of its best-selling cars.

Based on the Rio supermini platform, the Stonic features familiar Kia styling, such as the ‘tiger nose’ grille, and will bring a ‘Targa’-style roof that enables buyers to choose a two-tone paint finish, inspired by the design of the 2013 Kia Provo concept. It will be available in Europe with up to 20 two-tone colour combinations, with a choice of up to five colours for the roof.

Initial engine details have now been released, with the petrol line-up to include the 118bhp 1.0-litre T-GDI turbo unit as well as 1.25- or 1.4-litre naturally aspirated MPI engines alongside a 1.6-litre diesel unit.

The Stonic will also offer a 352-litre boot with a two-step boot floor and Kia promises class-leading shoulder room and generous leg and head-room.

The Kia Stonic debuts in September at the Frankfurt Motor Show.