Kia has teased a first image of its forthcoming XCeed ‘urban crossover’, due to be revealed in full on 26 June. 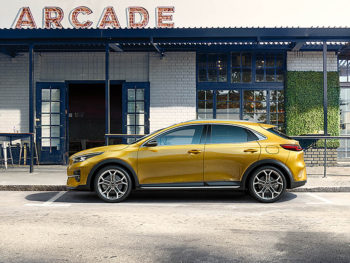 Though we only have Kia’s word to go on, the styling is in-between a regular hatchback and an SUV, with Kia itself saying that it represents a, “sporty alternative to traditional larger SUVs”, and it is also supposed to offer a more sporting driving position than an SUV, but is higher than a hatchback.

The coupé-like appearance of the Kia XCeed was designed by Kia’s European design centre in Frankfurt, Germany, under the direction of Gregory Guillaume, vice president of design for Kia Motors Europe.

Despite the rakish looks, the Kia XCeed is said to offer comparable levels of interior space and luggage capacity to Europe’s best-selling SUVs.

Emilio Herrera, chief operating officer at Kia Motors Europe, commented: “The sporty design and demeanour of the new Kia XCeed makes it more innately desirable than many taller, larger SUVs. Yet it offers this without compromising on versatility, with its packaging achieving the cabin and storage space of an SUV in a sportier body and more compact footprint.”

UK on-sale date, specification and pricing will be confirmed in due course.