Kia to launch further seven EVs and expand into subscriptions

Kia has announced plans to launch a further seven electric vehicles and move into car subscriptions; part of its core plan to diversify from being an internal combustion engine (ICE) carmaker. 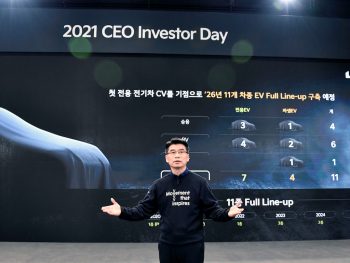 The EV pillar now includes further details of the seven dedicated electric vehicles that will complete Kia’s previously announced aim to have an 11-model EV line-up by 2026. It’s planning for battery electric vehicles, as well as hybrids and plug-in hybrids, to make up 40% of all sales by 2030.

The seven new dedicated EVs will be built on the Electric-Global Modular Platform (E-GMP) architecture, joining the four based on existing ICE derivatives.

Initial details reveal that the EVs built on the E-GMP base aim to set new benchmarks in electric range, driving performance, interior space and use of new technologies. The EVs will function as smart devices with expanded application of Audio Video Navigation Telematics, over-the-air updates and Feature on Demand (FoD) services.

The first dedicated EV from Kia, codenamed CV, will be featured with HDA2 (Highway Driving Assist Level 2) technology. And starting in 2023, Kia EVs will be equipped with Highway Driving Pilot (HDP), a Level 3 autonomous driving development.

Kia’s mobility services – the second core pillar of Plan S – will gain a competitive edge by carefully targeting and focusing on core areas, both business-to-consumer (B2C) and business-to-business (B2B)

In the B2C domain, Kia will expand existing services. In Spain, the company’s flagship car-sharing service Wible will be expanded with Wible Más and Wible Empresas. The car usership service ‘KiaMobility’, which was launched in September last year as a pilot project in Italy and Russia, will also launch in additional European markets.

In the B2B sector (including to governments), Kia will launch an EV-based service that combines subscription and car-sharing. Under this new mobility service concept, vehicles will be used for business on weekdays and rented by individuals on the weekends.

Kia’s subscription program ‘Kia Flex’, which was introduced in Korea in 2019, will launch a global version later this year under the name ‘Kia Subscription.’ The service will be operated by Sixt Leasing, which was acquired by Hyundai Motor Group last year, and the vehicles will be provided by the company’s regional affiliates and dealers.

The final pillar focuses on Kia’s work to strengthen its PBV business. The brand is already starting to progress its PBV plans and has now said it will launch its first PBV model in 2022 and plans to sell one million units annually by 2030. To this end, Kia will develop a variety of specialised vehicles based on its PBV-dedicated skateboard platforms.

Ho Sung Song, president and CEO of Kia Corporation, said: “Kia is being reborn in 2021 with a new logo, new design, and new corporate name. Kia will transform into a brand that excites and inspires customers with innovative mobility experiences.”