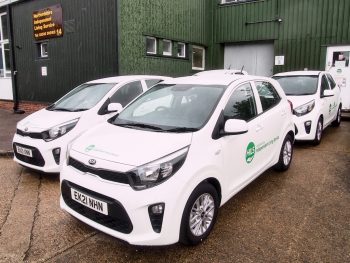 HILS will use the cars to deliver more than half a million meals this year – more than 1,500 meals a day – to support older and vulnerable people across Hertfordshire.

The social enterprise originally operated a small fleet of ‘oven vans’ that were used to deliver freshly cooked food, but has since switched to delivering ready-cooked food using a range of different city cars.

The Kia Picanto was chosen for the new fleet based on its five-door practicality and space combined with affordability and a seven-year/100,000 mile warranty as standard. The deal was placed with business specialist Ken Brown Stevenage.

Phil Martin, director of resources at HILS, commented: “The Kia Picanto has really impressed us and despite having previously having a fleet of city cars, the Picanto itself far exceeds other vehicles we have relied, on and suits our needs despite the large volumes of food we deliver on a daily basis.

“As important as the car’s features themselves, our decision to choose the Picanto was also based on the excellent business-focused service we received from the staff at Ken Brown Stevenage, which made the entire process straightforward and a pleasure.”