Kia’s e-Niro fully electric SUV will have an official 301-mile range under WLTP testing when it launches in Europe next year. 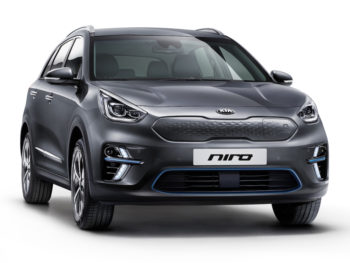 The carmaker said the homologated range would apply to the higher-power 64kWh version, which also brings an official WLTP range of 382 miles for city driving.

In Europe, the fully electric model, which joins hybrid and plug-in hybrid versions, will be offered as standard with a 39.2kWh battery pack, which has been homologated for a 193-mile combined cycle range but it’s expected that only the higher range battery will come to the UK.

Both variants will be front-wheel drive only and, as with the Kona EV, the smaller battery will also get a lower-powered motor. The 64kWh pack gets a 150kW motor that enables the e-Niro to accelerate from 0-62mph in 7.8s. In the case of the 39.2kWh pack, motor power drops to 100kW, giving a 0-62mph time of 9.3s.

The e-Niro gets Kia’s usual seven-year/100,000-mile warranty, which includes the battery pack and electric motor, and will debut in European specification at the Paris Motor Show.

To date, the existing hybrid and plug-in hybrid variants have sold 200,000 units globally since their launch in 2016 – with more than 65,000 sales of the hybrid crossover taking place in Europe.

Previous: EU to probe BMW, Daimler and VW over possible collusion
Next: Audi embarks on EV offensive as E-Tron premieres