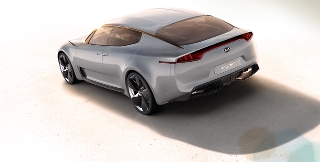 It reflects two priority areas for the brand, reinforcing its emphasis on efficiency and technology at one end and sportiness at the other, according to ‎President & CEO of Kia Motors UK, Paul Philpott.

The hybrid is likely to share technology with sister brand Hyundai, which told Reuters last month that it would also be launching a rival for the Toyota Prius. Disguised prototypes of Hyundai’s test vehicles have been spotted during on-road testing.

Electrification will also form part of a wider range for the new Optima, with a plug-in hybrid due in 2016, possibly using a version of the Hyundai Sonata’s drivetrain. The Optima range will grow to include an estate version for the first time, as well as a performance model.

“Optima has been a small volume product for us, we’ve only had one engine and one bodystyle,” said Philpott. “Next year we’ll get a wagon and a range of engines, a really exciting product and we see some real growth for us with additional powertrains and bodystyles.”

An increased focus on the sportier side of the range will introduce GT Line trims across key models, starting with the new Sportage and Cee’d, and a rear-wheel drive sports car based on the GT concept will launch in 2017.

Three new products, likely to replace the Venga, Picanto and Rio, or to include a B-segment crossover similar to the Niro concept, are also due in 2017, while the final newcomer due in 2018 could be an all-new Cee’d.