Kia has debuted a new fully electric four-door saloon at Geneva, revealing possible plans for a production model in the future. 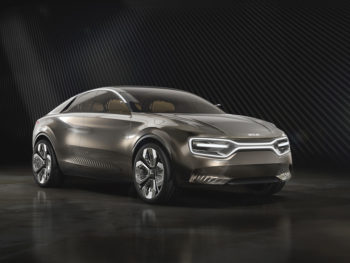 Named Imagine, the concept is intended to “not only get your pulse racing, but to also signpost our holistic and emotional approach to electrification”, according to Gregory Guillaume, vice president of design for Kia Motors Europe.

It’s not intended to sit within existing vehicle categories and brings together design elements taken from SUVS, saloon and crossovers.

Guillaume added: “It’s a large C-segment car – the vehicle size that’s incredibly popular in Europe – but the only things it holds on to are Kia’s brand values. It hints at something familiar, but is something entirely new. I think of it as a category-buster, and a disruptor – it’s familiar and understood but at the same time progressive and new.”

Design features bring a reinterpretation of Kia’s ‘tiger nose’ grille and a single sheet of glass for both the windscreen and roof, helping to create the feel of an open and spacious interior for passengers. It also features two boots: a ‘frunk’ front trunk and a traditional rear storage area accessed through the glass hatch.

No details of the powertrain have been revealed but the concept gets a low-mounted, induction-charged battery pack that powers a compact drivetrain, differing from the set-up of the new e-Niro electric crossover, which is based on the existing architecture of the hybrid-powered Niro.

The interior features 21 individual ultra high-resolution screens around the top of the dashboard – intended as a “riposte to the on-going competition between some automotive manufacturers to see who can produce the car with the biggest screen,” according to Kia Motors Europe’s general manager of interior design, Ralph Kluge – along with a ‘floating’ centre console and four leather and silk-covered seats.