The lack of kerbside charging infrastructure is emerging as the biggest barrier to adoption of electric vehicles by businesses. 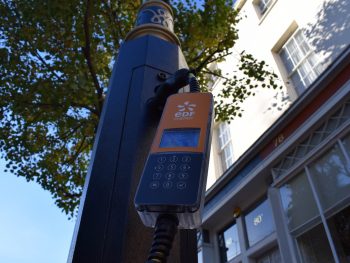 So says the Association of Fleet Professionals (AFP) as it warns that the existing national strategy for installations of kerbside chargers is far from effective.

Under the current government approach, 75% of the cost is met by a national fund and 25% is paid by local authorities – but AFP chair Paul Hollick said the impetus and ability of local authorities to do so varies massively from area to area.

“Each kerbside charger costs around £2,500 to install, so local government still needs to find £600 for every unit. In the wake of the pandemic, many simply don’t have the money, even if there is the will.

“This leaves fleets in a position where they are having to work out which of their drivers don’t have access to kerbside charging and lobby local authorities individually for the installation of chargers in specific streets. This is proving time-consuming and not particularly effective. It is just not really working as a system and proving to be a barrier for fleets.”

Speaking to Fleet World last month, Hollick said there are over 400 local councils in the UK and dealing with them, particularly for fleet operators operating nationally, has been proving challenging.

He also warned that even if the individual fleet wants to pay the 25% themselves, they still need to get approval from the local council to put in the charger.

And without kerbside chargers, Hollick added that employees who can’t charge at home are either reliant on local infrastructure or the motorway charging stations, which bring their own issues. According to figures, around 40% people live in apartments or terraced houses and don’t have access to on-street parking.

Hollick also said that the problem was only likely to grow in the medium-term as fleets looked to adopt EVs very rapidly over the next few years.

“A lot of attention is being given to creating network of superchargers across the UK and that is important to the viability of EVs for fleets and for everyone else but, to our mind, the issue of kerbside charging trumps everything else. The vast majority of EVs are charged overnight and that facility needs to be made available to everyone.

“The current situation means that there are around 40% of motorists who will find it very difficult to adopt an EV, no matter the strength of incentive – such as very low benefit-in-kind taxation – that the government might create for them or their employer to acquire an electric car or van. It creates real problems at a practical level.

“This is frustrating because companies like Connected Kerb and Ubitricity are creating kerbside charging solutions that are really very effective and make sense in use but they are just not being adopted quickly or widely enough.”

Hollick also expressed concern that the situation could become a ‘political football’ where central and local government blame each other.

“What we really need is for the Department of Transport to grasp the nettle and create a structured national programme for kerbside charging on as many streets as possible by the end of the decade.”

Chris Pateman-Jones, CEO of Connected Kerb, said that with around 40% of UK residents living in housing without access to off-street parking, EV charging at the kerbside is critical to unlocking a full, fair and fast transition away from the internal combustion engine.

“Local authorities are in a unique position to enable this, but without the knowledge and understanding of the options available, misconceptions around barriers such as cost are stifling progress,” he added.

“We offer multiple funding options, including fully-funded, and future-proofed solutions for many local authorities, which means that not only do our chargers last over 10 years, and grid connections are installed only once, but we also can add more chargers quickly and cheaply as demand grows. Additionally, we can incorporate other tech – everything from parking and air sensors to 5G antenna – all packed into existing street furniture like bollards. All of these factors bring down costs for local authorities, landlords, and ultimately drivers – creating cleaner, quieter, better-connected communities.”