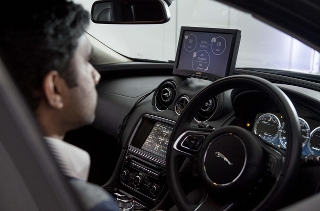 Researchers for the Jaguar Land Rover 'Sixth Sense' are employing advanced technology, from sports, medicine and aerospace, to monitor the driver's heart rate, respiration and levels of brain activity to identify driver stress, fatigue and lack of concentration. The UK-based team is also looking at innovations that would reduce the amount of time the driver's eyes are off the road whilst driving, and how to communicate with the driver via pulses and vibrations through the accelerator pedal.

Dr Wolfgang Epple, Jaguar Land Rover director of research and technology, said: "We believe some of the technologies currently being used in aerospace and medicine could help improve road safety and enhance the driving experience. The car is becoming more intelligent and more able to utilise cutting-edge sensors. These research projects are investigating how we could exploit this for the benefit of our customers and other road users.

"One key piece of new research is to see how we could measure brainwaves to monitor if the driver is alert and concentrating on driving. Even if the eyes are on the road, a lack of concentration or a daydream will mean the driver isn't paying attention to the driving task. They may miss a warning icon or sound, or be less aware of other road users so we are looking at how we could identify this and prevent it causing an accident."

The carmaker has revealed its technology as it also unveils a Range Rover Sport that can be guided by the driver on a smartphone outside the vehicle and new technology to warn drivers of potholes.

In the latest announcement, Jaguar Land Rover says it is assessing how a vehicle could monitor the well-being of the driver using a medical-grade sensor embedded in the seat of a Jaguar XJ. The sensor, which was originally developed for use in hospitals, has been adapted for in-car use and detects vibrations from the driver's heartbeat and breathing.

"As we develop more autonomous driving technologies, there will be instances when the autonomous car needs to hand control back to the driver," added Dr Epple. "To do this safely the car will need to know if the driver is alert and well enough to take over. So our research team is looking at the potential for a range of driver monitoring technologies to give the car enough information to support this decision. If the car detects severe health issues, or simply how alert the driver is, then the car could take steps to ensure the driver is focussed enough on the driving task to take over."