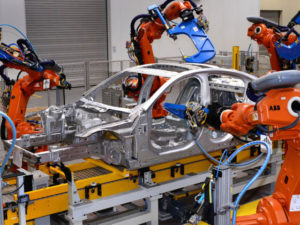 Cuts could be made at Jaguar Land Rover’s Solihull plant, with staff being transferred from nearby Castle Bromwich

A spokesperson declined to confirm which plants or products this would affect, or the extent of the adjustments which are being made, but reports suggest that cuts could be made at its Solihull plant, with staff being transferred from nearby Castle Bromwich. It follows a “temporary” production cut at its Halewood plant, announced in January.

Jaguar Land Rover recorded a 1.7% rise in global sales last year, to 614,309 (up 1.7%) units, but in its most recent quarterly report said the market had become more challenging. Uncertainty around diesel, political changes such as Brexit, weakening of UK and US markets, pricing issues and electrification had all contributed.

In the UK, managing director, Jeremy Hicks told Fleet World that the company was also facing unprecedented change in the fleet sector, including the “arbitrary” rise in Benefit-in-Kind for diesel vehicles. Most of its sales in the UK (80%) are diesel-powered, though new plug-in hybrids and the electric I-Pace are starting to shift demand.

Jaguar Land Rover has 43,000 employees globally, and produces the Jaguar E-Pace and I-Pace SUVs in Graz, Austria, with a new factory in Slovakia due to open later this year to meet demand for the Discovery. It also has manufacturing plants in China and Brazil. In a statement, the company said it would continue to recruit engineers, graduates and apprentices, and remained committed to its UK plants, following more than £4bn investment since 2010.