Jaguar Land Rover has confirmed it’s reducing its global workforce by around 4,500 people, starting off in the UK. 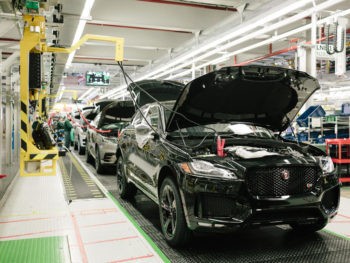 The much-anticipated announcement forms part of a ‘major transformation plan to lay [the] foundations for long-term sustainable profitable growth’ and is on top of the 1,500 redundancies that were made last year.

The carmaker has suffered a ‘perfect storm’ of declining sales in China, the introduction of the WTLP test cycle and the diesel downturn, as well as the economic uncertainty from Brexit – the company has previously warned that a no-deal Brexit could impact tens of thousands of jobs.

Last year saw it announced a series of production adjustments in the UK including a two-week shutdown at Solihull in October and a switch to a three-day week at its Castle Bromwich plant until Christmas as a result of “the continuing headwinds impacting the car industry”. It also announced last summer that it was moving production of the Discovery to its new factory in Slovakia, ending almost 30 years of production of the SUV in Solihull.

Since then, UK registration figures reported earlier this week have seen Land Rover registrations for 2018 fall 5.7% while Jaguar was up 4.2%.

Announcing the redundancies today, the carmaker said the transformation programme would deliver £2.5bn in cost reductions and cashflow improvements over 18 months, as well as long-term strategic operating efficiencies.

CEO Prof Ralf Speth commented: “We are taking decisive action to help deliver long-term growth, in the face of multiple geopolitical and regulatory disruptions as well as technology challenges facing the automotive industry. The ‘Charge and Accelerate’ programme combines efficiency measures with targeted investment, safeguarding our future and ensuring that we maximise the opportunities created by growing demand for Autonomous, Connected, Electric and Shared technologies.”

JLR has previously said that half its line-up will have electric versions by 2020 and electric vehicle developments in the last year have seen the launch of the new I-Pace SUV (see road test here) as well as the arrival of PHEV Range Rover and Range Rover Sport models, and a PHEV Range Rover Evoque is due next year – although PHEV models are still conspicuous by their absence in the Jaguar portfolio.

Prof Speth continued: “The next chapter in the story of the Jaguar and Land Rover brands will be the most exciting – and challenging – in our history. Revealing the iconic Defender, investing in cleaner, smarter, more desirable cars and electrifying our facilities to manufacture a future range of British-built electric vehicles will all form part of building a globally competitive and flourishing company.”

Previous: Today in Fleet – Thursday 10 January
Next: One day at a time: The benefits of short-term rental