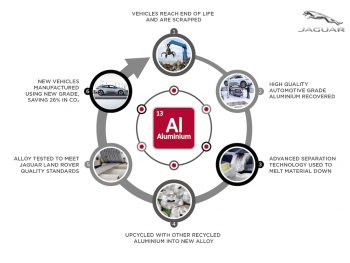 While aluminium recycling, including from cars, is nothing new, the carmaker has been working since 2013 to ensure material can now be used for new cars, instead of just the usual drinks cans and bottle tops. And with the carmaker saying it can reduce production CO2 emissions by up to 26%, there are major eco benefits at stake.

Typically, end-of-life vehicle scrap is exported overseas where it can be re-used for low-end applications, but new advanced separation technology from JLR has enabled it to be upcycled back into the automotive process, helping close the loop and reduce the environmental impact.

Under the carmaker’s REALITY aluminium project – a key part of its Destination Zero mission to reduce carbon emissions – engineers are now able to use the recycled aluminium parts and mix it with a lower amount of primary aluminium to form a new and tested prototype alloy, comparable to the existing Jaguar Land Rover grade and quality.

Under the latest development, JLR tests have shown that the new alloy passes initial quality testing – potentially giving the green-light to its future use.

It’s particularly pertinent as the market increasingly moves to large corporate shared fleets – in the future such vehicles will be able to be recovered, de-polluted and shredded en masse, becoming tomorrow’s fleet and private vehicles.

Gaëlle Guillaume, lead project manager for REALITY at Jaguar Land Rover, said: “As we move into an autonomous, connected and electrified future, with the potential of shared fleets being de-commissioned en masse, it could allow Jaguar Land Rover to engineer this closed loop recycling alloy into tight production schedules to further improve efficiency and environmental benefits.”

The £2m project is co-funded by Innovate UK and is being run in partnership with Brunel University.