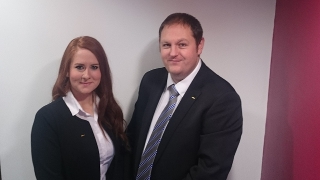 The changes follow a restructure in the JCT600 Volkswagen fleet operation to align with Volkswagen’s brand strategy as well as future JCT600’s plans for growth.

Jewsbury joined JCT600 in 2012 as local business development manager for Volkswagen, covering the Bradford area, and has now been promoted to a national position in which he will liaise with brokers throughout the UK.

Dallas joined JCT600 in July 2012 as a sales executive at Volkswagen Wakefield before moving to Volkswagen York a year ago to take up her role as local business development manager with responsibility for developing relationships with local companies in order to generate business sales from the York retailer.  In her new role, she will now also be responsible for Volkswagen fleet sales around Bradford in addition to her existing role covering the York area.

‘In this newly created role, I will be able to build relationships with brokers throughout England, Wales and Scotland, helping them to get the best value for their customers,’ said Jewsbury.

Rebecca Dallas added: ‘I’m really looking forward to my new role covering this wider area as there are lots of opportunities to target a large number of potential customers in West Yorkshire.  I will also be seeking to generate greater awareness of JCT600 Volkswagen fleet as well as maintaining current relationships with existing customers.’