Jaguar Land Rover is playing its role in supporting the fight against coronavirus, providing more than 160 vehicles to emergency response organisations. 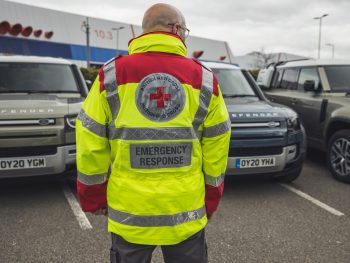 In the UK, 57 vehicles including 27 new Defenders from the press fleet have been put into service with the British Red Cross to deliver medicine and food to vulnerable people including the elderly.

A further 65 vehicles are supporting the Red Cross Societies in Australia, Spain, South Africa and France, with more vehicles expected to be deployed in the UK and other countries very soon.

The vehicles have been made available due to the postponement of launch events.

Protective equipment is also being donated to the NHS including wraparound safety glasses to the Royal Bolton Hospital, St James’s Hospital in Leeds and Birmingham Children’s Hospital.

Work by Jaguar Land Rover with the UK government has seen it offer its research and engineering expertise, as well as digital engineering and design, printing of 3D models and prototypes, machine learning, artificial intelligence and data science support.

Simon Lewis, head of crisis response, British Red Cross said: “Thanks to Land Rover’s generous support, our Emergency Response teams in the UK will be to reach even more people living in isolated communities than we could alone.”