Jaguar Land Rover is to launch new four-cylinder petrol engines as part of its Ingenium line-up and has also announced the development of a new transmission. 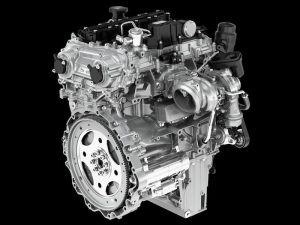 The new Ingenium petrol engines are already in production at the carmaker’s £1 billion Engine Manufacturing Centre and are said to deliver up 25% more power than the engines they replace and offer fuel consumption reductions of up to 15%.

The new powertrains use a common architecture based on a 500cc per cylinder displacement, enabling their use for a range of derivatives for models including sports saloons and luxury SUVs, and will be available from 2017.

Nick Rogers, group engineering director, said: “TRANSCEND demonstrates Jaguar Land Rover’s commitment to original research that improves the driving experience and the environmental performance of our vehicles. It will make manoeuvring and off-road use easier than ever before for drivers whilst also improving on-road vehicle dynamics and CO2 emissions.”