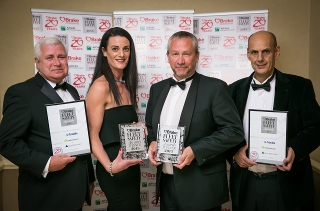 The firm rolled out GreenRoad’s driver performance management system across its entire fleet in the UK and Ireland in 2011, following a pilot programme in 2010.

Over the past five years, the firm has seen a 36% decrease in its insurance premiums, thanks to the partnership with GreenRoad and internal initiatives linked to GreenRoad’s driver behaviour and fleet performance solution.

2014 was particularly marked out for safe and cost-effective driving, with 20% fewer collisions versus the previous year and a 34% decrease in related costs.

Iron Mountain has also seen speeding violations drop as a result of GreenRoad’s Speed by Speed Zone software, which has been particularly effective at decreasing instances of drivers exceeding speed limits in low-speed zones.

In recognition of the success of this initiative as well as GreenRoad and Iron Mountain’s ongoing collaboration, the companies were recently awarded the coveted 2015 Brake Fleet Safety Partnership Award.

“I think that averaging less than one often-minor incident per fortnight per vehicle, for a fleet that covers eight million miles per annum, is just phenomenal but we will continue to work with the drivers to reduce further, of course,” added Morgan.

Lucy Thomas, GreenRoad account manager, commented: “The success Iron Mountain have had since implementing GreenRoad is testament to their dedication to ensuring that all elements of the solution are fully leveraged and closely monitored. Iron Mountain have thoroughly embraced the GreenRoad system and they are an outstanding example of how remarkable achievements can be acquired by taking the right approach and pushing the boundaries.

“We are gratified that Brake has recognised the magnitude of the improvement Iron Mountain has achieved with GreenRoad systems by awarding this year’s Fleet Safety Partnership Award to both companies.”