By Jonathan Musk / 2 years ago / Interview, Opinions / No Comments 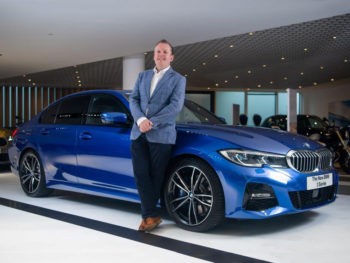 After less than a year in the role, East has laid out his plans for the future of BMW fleet sales in a climate where Brexit, WLTP, RDE2 and falling diesel sales are each taking their toll.

Business and uncertainty are not typically a match made in heaven and with the announcement of a Brexit extension until 31 October 2019, things aren’t about to get any simpler. East comments: “With unclear future taxation, it’s difficult to advise customers which way to go. We don’t want to over complicate the market.” Yet the response is to create a new strategy to maximise growth. He adds: ”We have very strong channel performance in fleet, across the various different subsets but there’s more that we can do.”

The influx of new emissions regulations has cost the company money, undoubtedly, as fleets have been unsure as to which cars to choose without being stung by unexpected tax if those vehicles turn out to be penalised at a later date. BMW and Mini were both quick to ensure all models were WLTP tested and BMW has been an early player in the electrified scene that has become such an important part of business purchases thanks to attractive credentials – the 330e plug-in hybrid the second best-selling model in the 3 Series line-up after the diesel and that success is expected to continue.

“Of course, with a global changing structure, it’s about changing our EV footprint and again we’ve got great products having entered into the market early with the i3. Electrification is an important part of our strategy.”

The perfect storm of industry changes will be topped off with RDE2 legislation. East adds: “Again we will make sure where we can that we will be ahead of the curve and can give customers as much clarity as we possibly can.”

So what are the plans for the future of BMW fleet sales and what do they intend to do to up the ante? The answer is channel management, which is seen as key in the company’s 2019 plans and beyond, comments East: “For us, it’s about sustainable channel management. If you look at February year-to-date [sales], we grew in first price level customer channels, while we decreased our second price non-customer channels (dealers, internal fleet). It’s a slightly different story for our competitors. We take [channel management] very seriously, but it’s about profitable growth for our retailers and the longer term effect of RV management. And this is a clear objective for us moving forward into 2019 and beyond.”

Further corporate alignment has taken place in the form of bringing together the corporate teams from BMW and Mini in the UK to align and complement rather than compete with each other.

And leaning on BMW’s populist nature, customers are often keen to support the brand through thick and thin. That brand loyalty hasn’t gone unnoticed and is just as relevant for fleets, “One thing I’ve been impressed by is not just the depth of the customer relationships we have but also the level of passion there is,” comments East proudly.

The next stage is recognising the company’s considerable and growing technological developments. This has led to a technological leadership, believes East, but using it to differentiate the brand in the market is no simple task. Of course, electrification of the brand has helped enormously with this image and the support the company has given to the likes of Formula E has allowed it to nurture this stance on a global scale.

Finally, making it simpler to buy a BMW is a key goal and to recognise end-users and the importance of keeping them attracted to the brand. East’s focus here is simple: “Sometimes we have an arm’s length relationship with an end-user, but those end-users are the same as a retail customer and they expect the same. How do we make it really simple to buy from us, but more importantly to stay with us.”

This year is particularly active for BMW, with 18 model launches of which 9 are incremental and 8 are luxury models. Importantly, by the end of the year, the BMW range will be the youngest across the segment.

Following the fun new Z4 and business-focused 3 Series launches this year, the 8 Series convertible, new X7 (that takes the fight to the Mercedes-Benz GLS and Range Rover for the first time), will be joined by the 7 Series LCI (BMW speak for facelift) and a new 1 Series. East believes most BMW models have a place in fleet, even at the higher end and sports car, though he alludes to a new focus on the 7 Series for corporate buyers, likely based on his experience at Mercedes-Benz and its success with the rival S-Class.

As for BMW’s electrification plans, midway through this year will see the launch of the updated BMW i3 featuring a new 120Ah/42.2kWh battery (up from the current 94Ah type) that should offer a true range of 160 miles per charge. This will be followed by the new generation 330e that provides up to 37-miles range per charge and with less than 40g/km CO2, enabling more journeys to be completed on electric power than previously possible. The updated X5 xDrive45e and then the 7 Series plug-in hybrid will further expand the plug-in range. Each of these is seen as important cars for fleets with varying reasons, whether it’s a car rental firm, car sharing scheme or regular annual business mileage.

Next up, BMW will begin building the iX3 towards the end of next year, with the car’s intended sale in 2021. The i4 is due in 2021, most likely arriving in the UK in 2022, and was designed from the ground up as an electric car. However, Fleet World can reveal that the car will be offered with combustion engines as well. On electric power though, BMW Group has already stated the car should be good for a not inconsiderable 372-miles per charge. “Our expectation is that there will be a significant market for these cars in 2021,” East adds.

Looking slightly further into the future, Fleet World can reveal the iNext (concept codename), that is largely based on an X5, won’t be called the iX5. This car is destined to introduce the next stage of the company’s autonomous driving technology, likely Level 3 – which should allow for full autonomous driving along certain road types, e.g. a motorway, though legislation is said to be behind what carmakers can produce today and is the restricting factor.

In addition, at the start of 2020, the new Mini three-door hatch will be released as a full electric version for the first time and a decade after the original Mini E.

“With 25 electrified models by 2025, the breadth and speed of change shows no signs of slowing down,” East concludes.

The industry buzzword of the moment, ‘mobility’ is one of those terms banded about that always seems to be placed at some indeterminable time in the future, and never ‘now’. However, with brands like DriveNow taking off and, with the general global shift to urbanisation and particularly the growth of countries including China, combined with the complexity in the automotive market with factors such as Low Emission Zones, BMW has a firm eye on a ‘mobile and shared automotive future’.

East adds: “I think it’s very much about looking at shared mobility. There has recently been the joint venture formed with Daimler, which ten years ago would have been unheard of. Particularly around the DriveNow and Car2Go brands, it makes sense to combine those two and leverage the scale of them. But it’s also about the next stage of things and the innovations will continue. I think there’s now a real focus between two strong automotive brands.”

And, while shared vehicle models are still in their infancy, at BMW the subject isn’t. “We describe this as ACES – Autonomous, Connected, Electrified and Shared. I think they are the four pillars of what will be our future mobility strategy.”