By Martyn Collins / 1 year ago / Interview / No Comments

Peugeot has gone from selling 200-250, to a maximum of 1,500 cars thanks to police tenders. Martyn Collins talks to Richard Abbott, head of specialist vehicles about now and opportunities in the future. 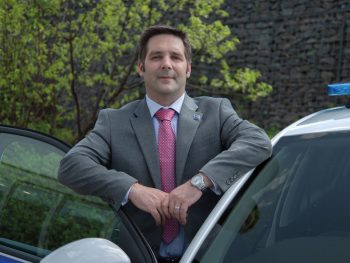 Think police vehicles and Peugeot probably isn’t the first brand to come to mind. Yet the French company, under the title of Peugeot Specialist Vehicles, has been undertaking police conversions since 1986.

From 2000 to 2011, under the old framework, Peugeot were selling 200-250 vehicles a year to the police market. However, when new central government contracts were released through the Crown Commercial Service (CCS) in 2015, the police ran many competitive tenders and Peugeot won 22 of the police forces’ vehicle supply deals, for low and intermediate cars. A two-year contract initially, it has since been extended for a further two years.

We spoke to Richard at a recent forces test day to find out more.

Where are you in terms of police fleet volume?

“Volume is very dependent on what police budgets are every year quite frankly, but it has always been a minimum of 1,100 a year up to around 1,500 in busy years.

“Of the vehicles we supply into the police market, the main one is the 308, as a General Purpose Patrol Vehicle (GPPV) – a beat car or previously a panda car. So 308s will account for 70% of that volume, not all of them marked, as they run CID vehicles as well. These are just unmarked. With the 208, it’s probably 20-25% as small marked vehicles – or as a general pool car. Outside of that, we’ve started to supply a lot of 3008 within rural policing, replacing some of their all-wheel drive products, because of Grip Control. In terms of 3008, we’re probably doing around 100 or so a year, as it’s a smaller market.

“The challenge in operational policing is that it’s different all over the country. Therefore, the solutions that the police need are very, very different. So, whilst the Metropolitan Police take 308 estates, would they take 3008 with Grip Control? As they have less need in their area, unless there’s a really heavy snow fall throughout London!”

So how do you go about offering Peugeot police conversions?

“What we do as Peugeot, and wider as the PSA Group, is we actually design the conversion on the vehicle. The importance for us as a group is the safety and the quality. We don’t want to put police officers or members of the public at risk, and we want to protect our brand.

“So we control and design the way that a conversion electrically and technically interacts with the vehicle. We do the testing – it’s added value that we offer to the police. It’s our job to convince our customers that technology can do something for them nowadays.

“So it’s another level of investment, it’s not cheap, but it’s vital to protect our relationship with the police as a duty of care. As far as Peugeot is concerned, all of the marked vehicles that we’ve done in the last four years, have all gone through our ‘one-stop shop’ programme. So this is basically taking a car, turning it into a police car and selling it on one invoice.

“We give them a choice, as there’s lots of different light bar manufacturers out there and it’s important to the police that they have the right lights. What’s important for us as a manufacturer is the way that equipment is fixed onto the vehicle – not necessarily the equipment itself.

“Instead of completely bespoke versions, which only one person knows how to deal with, we  standardise the things that have already been tested; important when you’re dealing with 100-200 different outlets! In reality, it can be taken to any dealer’s workshop. Because it’s a standard vehicle, they can quickly diagnose if the problem is a car or conversion issue.

“First of all, the base vehicle has to be a standard car from the factory, although we may open some options up for them – gone are the days where you can take a GTi engine and put it in a low-spec car! So for example on 308, the range is from Active upwards, but we still supply the police a lower level – as they don’t need all the specification on an Active.

“Despite the police being exempt from type approval, we still have to supply a fully compliant car. Then they make their engine choice. We have some forces take the 100hp, we have others that take the 130hp and other forces might take an automatic. That’s fine, that all of those choices exist. Some just take petrol models – Greater Manchester and the Met Police for example.

“So, we sit with them and discuss what it is they need that vehicle to do. So, for example, for a vehicle in Scotland, we fit front spots to the light bar, as they need to have visibility as high up in the vehicle as possible.

“The start of the conversion is the same – we take the base car, we put in a bespoke wiring harness, it’s plug and play really. The harness is what makes it a police car, it’s how we connect to it and how we connect everything needed.

“What the harness enables us to do is plug in all the different options to it. So, we might get an order of 500 police cars in the same spec, then they would select some options and we then just plug them in because of the multiplex wiring. They get a fully bespoke solution from a manufacturing point of view, although actually 90% of that is the same as other forces. From an aftersales and parts support point of view, 90% of that car is standard, so it’s much easier to support.”

So what happens when these cars enter the UK?

“When the cars come into the country, what we basically do is we remove the trim. The wiring harness is then laid into the car. They do a couple of other simple bits too, such as fixing the head restraints – simple, but consistent on every product.

“Then it’ll go across to the converter – there are eight, mostly up north. The converter will then have a menu of how that car is going to be built. He’ll put the trim and different parts into it, completely integral in the car, ready for programming. Why? Well, at the end of its service, it can be sold as a used car, as you can take everything out and it’s basically standard. You won’t see any holes in the roof, although the harness has to be drilled through – but we drill it underneath the roof rails!

“So, whether a vehicle is being built by a converter in the north, or in the Midlands, or in the South, all of those vehicles have been built using the parts that we say. This is so that we ensure that every vehicle fundamentally is being controlled.

“Whether it’s in a police workshop, or turns up in the PSA dealer network, they are able to recognise it as a Peugeot Specialist Vehicle and deal with it like that. Dealers don’t have the skills to diagnose problems with sirens, but there is a process in place where they can work with our technical teams and converters. So the police can take the vehicle in, they can diagnose it, repair it and get it back on the road.”

Do these cars come direct from the converter and are they registered there?

“We build them in the factory, wherever that factory may be across Europe. We will then determine centrally which converter is going to the job.

“The choice of converter is determined by where the force is  based and whose got the resources to do it – it is completely flexible.

“We will then determine the kit needed and send it over to the converter, telling them what they need to order up. They put it together, and do a quality check at the end of the process.

“The vehicle is then delivered, generally unregistered to the police, as they tend to register their own cars. They do the last bit of commissioning, such as fitting the radios, although we have all the licences to do that if they don’t want to.”

With Peugeot’s move towards electrification, do you anticipate any fleet demand for electric police cars?

“In a controlled area that’s perfect for electric vehicles, without a doubt there will be interest. The public sector has been tasked with bringing down CO2. The police don’t just buy petrol cars nowadays and electric cars have to form part of their future.

“So as a small beat car, which is going around inside the city centre, the e208 will be perfect. Plus, the local policeman in a rural area, because it will always come back to the police station, whenever a charge is needed. We have to offer the customer choice. With the car ranges, that’s petrol, diesel, electric, or plug-in hybrid versions of some of the bigger products. I believe there’s a real opportunity for 3008 there as well.

“So it’s up to the police to say, this is the right technology for a particular role.”