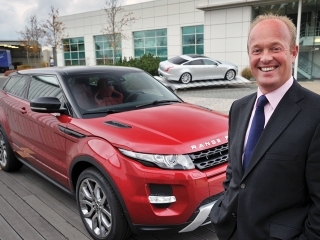 A few feet away from the global unveil of the Jaguar XF at the New York International Auto Show, Jeremy Hicks is feeling confident. And he has every right to – both the brands he looks after, Jaguar and Land Rover, are enjoying rising sales globally with record performances even for outgoing product. With new or refreshed models due for its five biggest‐selling lines within a 12‐month period, it’s hard to see that momentum slowing down.

But while there’s unquestionable retail appeal, it’s the fleet sector which will underpin a lot of that sales growth over the coming years. Within 12 months, JLR will have at least four vehicles with versions under 120g/km, compared with a single engine option in the XF last year, and Hicks is looking forward to reaping the rewards of years of preparation.

“The profile of our business is going to change substantially, and it’s not about taking away from retail sales, it’s about growing fleet sales. We want to match our retail strength with fleet and business strength,” he explains.

That’s a revolution brought about, in part, by new engines. The Evoque and new Discovery Sport will, before the end of the year, come down to 109g/km and 119g/km respectively, both expected to drive user chooser sales. Jaguar, meanwhile, has just launched the XE and the all‐new XF is close behind, each achieving best‐in‐class economy and emissions.

It’s a big change for a brand which has, until recently, relied on a car launched with a 90% retail share and no four‐cylinder diesel engine until 2011. Even then, it’s encountered some hurdles. “[The 2.2 diesel] immediately improved our position, but we lost a lot of potential fleet money because the Write Down Allowances changed,” says Hicks. “So we kept having a stop‐start, stop‐start, some of it caused by our own making originally, some of it caused by legislation.

“Since we’ve got a car at 129g/km, with XF, our momentum has just grown. I think we’ve cemented a place where the leasing companies know us, they know our strategy, they buy into the strategy, and customers want a change. I really believe that – they’re ready for a change.”

But the challenges go beyond launching new product: “When we started to lay down our growth strategy for the UK three years ago, I was really clear that we’ve got to have a very strong fleet and business operation,” he continues. “The network is now fully enabled, we have training programmes and demo cars, and we’ve worked really hard with the leasing companies and RV setters.

“Brick by brick we have put all the key enablers in place, which now makes launching a car like [the XF] really easy because the infrastructure is in place to do it, which we’ve been quietly doing over the last 12 months.”

Dealer engagement has been critical. Hicks says the brand’s ability to deliver on promises meant the network is on side, and the showrooms are mirroring a changing customer base. Virtual reality configurators for the XE and Discovery Sport, and appointing fleet specialists in a third of its UK network mean it’s engaging with customers in a different way.

“I know that user‐choosers get so hacked off when they go into a retailer and want to drive a car, because they browse like retail people, and someone gets a whiff that they’re a user chooser and maybe they don’t get a chance to sell a car, and they just get ignored. So that’s why we’ve been very specific about setting it up so the retailers are going to focus around selling these cars,” says Hicks.

“You’ve got to keep the whole thing simple. Look at the way the fleet market is now structured where single badge deals don’t exist anymore, it’s about multiple options. You can’t suddenly decide to become a corporate player, you’ve got to have the infrastructure, and that means the retailers have to be geared up in certain way to have the right level of support to deliver for customers.”

It’s already paying dividends. The XE, expected to be split equally between fleet and retail sales, is predicted to sell in volumes large enough to double Jaguar’s UK sales and the Discovery Sport is seen as being a significant growth area for Land Rover. Months before the production version is unveiled at Frankfurt, dealers are already getting enquiries about the F‐PACE crossover.

“There aren’t bad cars in the marketplace, our job is to make sure that we, as a British manufacturer, can deliver to the highest levels and I think we’re a great alternative,” says Hicks. “It’s not about doing something spectacularly different in every dimension; it’s about doing everything and doing it really well.

“So I think we’ve earned our stripes now to say we fully deserve to have a great place in the fleet market.”