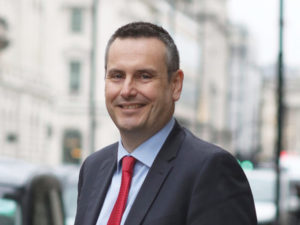 A household name and cornerstone of the fleet sector, Ford might have 100 years of heritage, but its founder, Henry Ford, knew agility was vital. “Anyone who stops learning is old, whether at 20 or 80,” he’s quoted as saying. “Anyone who keeps learning stays young – the greatest thing in life is to keep your mind young”. Arguably, that’s never been more relevant.

For Owen Gregory, director of fleet operations for the UK, conversations with customers aren’t as straightforward as they once might have been: “I’m not sure, as a fleet manager, that there’s ever been a more uncertain, more confusing time,” he says. “All of the rhetoric is anti-diesel, however, what about CO2 and fuel economy? We’ve got big personal tax incentives on plug-in hybrids, but am I sure they’re being charged up? And all of the published [economy and CO2] data is going to be shifting this year. So, dependent on which manufacturer you’re talking to, about which product, and in which month, that data could vary hugely.”

Gregory moved into the role in 2016, prioritising a strategic review of how Ford goes to market – an ongoing process. His approach; to work in partnership with customers and offer solutions, rather than simply being a vehicle supplier. This quickly identified growth opportunities in contract hire, and the subsequent focus on strengthening relationships is paying dividends, he says.

Product is important too. One in three UK commercial vehicles sold last year were Fords – an increase on 2016 – and, while passenger cars are a tough market, new or refreshed models helped keep the momentum going. And that’s not just the familiar names; Kuga outsells the Mondeo three to one in Europe, and the updated Edge and EcoSport will hope to build on that demand.

“[Medium SUVs were] the only segment that grew [last year], taking sales from every other segment, which is incredible. That momentum is still ongoing. We grew our share in that segment with Kuga, and particularly ST-Line, which is about a third [of Kuga volume]. There’s more of that market we can tap into.”

Shifting segments are the thin end of the wedge. Ford more than doubled its electric drivetrain investment, to £8bn ($11bn), at the start of the year – as a sign of the times, a hybrid Mustang and F-150 pickup are coming soon. In Europe, it’s part of the Ionity fast charge network consortium, and the updated Transit Custom will get a plug-in hybrid version this year. Gregory says fleet interest is on the up, but it’s not a straightforward conversation.

“There are a couple of things we’re getting questioned on. One is borne out of the way BiK is shaped – it’s over-promoting plug-in hybrids. We’ve got Mondeo hybrid, but it doesn’t give really low BiK. However, versus a plug-in hybrid, the real-world fuel economy – unless [the PHEV] is being used as it’s engineered to – is significantly better.

“One thing I’m arming the team with, when they talk to customers, is how to navigate that. We’re going to try and be completely transparent. If you are operating only in the middle of a low-emission zone and do 15 miles per day, then an EV is viable depending on what your cost base can handle. However, if you are going up and down the motorways, then there is nothing that’s going to beat diesel.

“It’s about helping everyone to navigate that choice, and giving fleet managers confidence to have that dialogue in their own organisations. I want to empower them with the right information, so they can counter all of the internal discussions they’ll be facing with the right choices for their business.”

“The level of risk of confusion is becoming clearer, and as we see the data it becomes clearer how confusing it will be. On a vehicle that doesn’t change, but just gets re-tested and the number is higher, people will know there’s a new test. But where the product is changing, and the CO2 doesn’t, that’s really difficult to see. It will wash out, but it will take until at least 2019.”

There are some opportunities, too. Gregory says 2018 will be as much about connected services as it will important new models, as Ford responds to consumer demand – expect more news later in the year. But the company has said 90% of its global range will be connected cars by 2020; the forthcoming Focus offers a preview, including remote status checks and unlocking via a smartphone app, while Waze navigation is being added to its infotainment systems.

In turn, connectivity is underpinning new ways that businesses and consumers can experience Ford. Its subsidiary company, Chariot, a smartphone-booked minibus service working in areas with limited public transport, launched in London with a fleet of Transits earlier this year. The capital is also home to Ford’s smart mobility unit, developing cloud-based solutions for sharing transport data and re-assessing how people can move. Gregory sees this as a virtuous circle – Ford can provide vehicles to these operations, then offer their services to customers too.

“Everyone has a massive appetite for this,” he explains. “You’ve only got to look at the scope, scale and vibrancy of people across the leasing and fleet management sector to see how much companies want this kind of service. And I think, as people who engineer and build a vehicle, that we’ve got an interesting place as part of that landscape. There are things that we understand better than anyone else, as we engineered and built [the vehicle].”

So as Ford progresses further into its second century, its founder’s mantra on staying young is still alive and well. A heritage many brands can’t match, but never afraid to learn new things.

Ford might be culling most non-SUV products in North America, but despite refreshes across its European SUVs, the traditional models are still vital in Europe. New Focus arrives late summer, including luxurious Vignale, sporty ST-Line and SUV-like Active trims, improved connectivity and new-generation engines, while upping material quality.

Gregory says sales have shifted heavily in favour of high trim levels over the last five years, and not just for cars. “Looking at incoming orders on the new Transit Custom, the top-spec Limited is really strong. What their van looks like outside their house, and how comfortable and convenient it is – as it’s their office – is really important to them.”

Commercial vehicle sales were up in every channel last year. The Transit Custom and Courier arrive in 2018, with repositioned, more upmarket Tourneo people carriers to follow, based on customer feedback. Transit and Tourneo Custom will also feature plug-in hybrid versions for the first time.