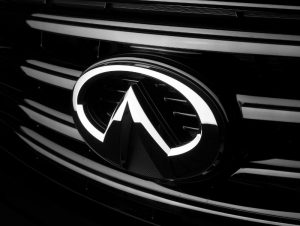 Infiniti’s variable compression ratio is said to be a production first.

The Variable Compression Turbocharged (VC-T) technology will debut on a four-cylinder petrol engine, and is said to have taken more than 20 years to develop. It enables the engine to change its compression ratio to suit the driving conditions.

An engine’s compression ratio is the difference between the volume of the cylinder with the piston at the bottom and top of the stroke. It’s typically fixed, as it’s defined by the internal components of the engine.

Infiniti’s technology has an actuator which can vary the length of the piston stroke, which in turn means it can raise the compression ratio to offer high efficiency at low loads, and vice versa. Turbocharged petrol engines typically have low compression ratios, to account for the heat and pressure of the air from the turbocharger when it’s under load.

Roland Krueger, president of Infiniti Motor Company said, “It is a revolutionary next-step in optimizing the efficiency of the internal combustion engine. This technological breakthrough delivers the power of a high-performance 2.0-liter turbo gasoline engine with a high level of efficiency at the same time.”

Previous: Fleets urged to spearhead adoption of drive-safe mode for mobiles
Next: Councils to get tough on traffic chaos from utility roadworks