In sight: What ADAS means for fleet maintenance

Camera-based driver assistance systems are adding vitally important calibration work to a windscreen replacement. As they become more common, Alex Grant finds out what the implications are for fleets. 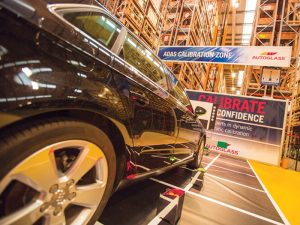 An extra eye on the road

ADAS, an acronym for Advanced Driver Assistance Systems, is a collective name for the semi-autonomous features fitted to a growing number of cars. It’s a transformative set of technologies with proven safety and insurance cost benefits for fleets, the more advanced systems including windscreen-mounted cameras for detailed monitoring of traffic conditions and lane markings ahead.

These rely on accurate data, and even a small inaccuracy in the position of the camera can be detrimental to its effectiveness. Yet research by Autoglass found two thirds of UK drivers and a third of dealers lack awareness of these systems, while 68% of drivers ignore advice to have them calibrated after a windscreen replacement. And, with 40% of the vehicle parc – significantly higher among fleets, where the average age of cars is lower – set to feature ADAS by 2020, it’s about to become a common job.

What does calibration involve?

The process varies by manufacturer, but the end goal is restoring the original alignment of the camera so it can function correctly. Some systems are able to self-calibrate by driving the car on the road and letting them recognise specific features, while plugged into a diagnostic tool.

The rest require static calibration, which involves parking the car on level ground with the wheels positioned using tracking lasers and the forward-facing camera (or cameras) aimed at a target board – each manufacturer has its own. Then the software is triggered using a handheld tool to check for alignment faults. The process takes between one and two hours, on top of the windscreen replacement, and, according to National Windscreens, around 75% of cars are calibrated this way.

Until recently, static calubration has meant taking the car to a franchised dealer, but it’s now offered at 10% of Autoglass depots and all National Windscreens sites.

What does this cost?

At the moment, it isn’t directly costing fleets anything. Thatcham Research says the costs are being picked up by insurers who view the systems as being too valuable not to be set up properly. The process varies depending what features are fitted to the car, but calibration work usually adds £200–£300 to the cost of the windscreen repair.

While that’s a major outlay for insurers, Thatcham Research sees reduced equipment costs bringing the prices down, and is working with manufacturers to ensure that future systems and vehicles are designed with the windscreen replacement in mind. It will also publish a Code of Practice this year to make sure the work is done correctly.

“Fleet managers need to ensure that when they get vehicle windscreens replaced, or refitted, that they ensure that correct recalibration procedures are followed by their suppliers,” says Andrew Miller, chief technical officer at Thatcham Research.