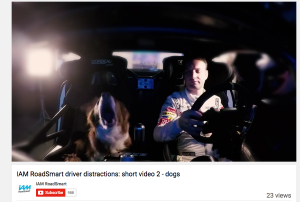 Figures from the DfT in 2013 found 2,995 cases where distraction in the vehicle was listed as a contributory factor to accidents.

And to mark the launch of the videos, starring former Formula 1 test driver Darren Turner, the charity has extended its 10% discount on Advanced Driver courses until the end of September.

In the videos, Turner attempts to drive an Aston Martin racing simulator around a virtual circuit while contending with a barking dog, ringing mobile phone and noisy five-year-old child.

At the end of each video, IAM RoadSmart’s head of driver behaviour Rebecca Ashton offers advice on how to handle each issue.

Turner, who also owns racing simulator company Base Performance Simulators near Banbury, said: “A professional racing driver is expected to maintain full concentration all the time while at the wheel – but I was surprised at how easy it was take your eye of the ball for a second and end up clouting the barrier in the simulator.

“Translate that to the real road, and the consequences could be far more serious.”

“In our videos we see Darren tackle some very common distractions that any driver could face,” added Ashton.

“It shows that even the best drivers can struggle if they are distracted for even a second. Whether you’re travelling with your kids, dog or even on your own there are plenty of things which might take your attention away from the road, and we’re all susceptible.

“But keeping your attention on the road is the most important way you can look after your passengers. Pull over in a safe place if you need to pick up a dropped toy, calm a frightened pet or answer the phone.”

Figures from the Department for Transport in 2013 found 2,995 cases where distraction in the vehicle was listed as a contributory factor to accidents.

And IAM RoadSmart’s Safely Home campaign, which surveyed 1,500 motorists’ habits, found the top four causes of distraction were children in the car (29%), changing the radio channel (27%), back seat drivers (26%) and mobile phone use (24%) (reference 2).

One in 10 of those surveyed also admitted to causing a crash because they were distracted.

IAM RoadSmart’s Advanced Driver course usually costs £149 and the 10% discount has been extended to 30 September. To take advantage of the discount, please call 0300 303 1134 quoting the reference RACE10.