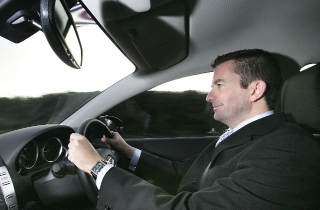 So says the Institute of Advanced Motorists (IAM), which has warned that car manufacturers are building high-tech distractions into their new vehicles and have made interiors “so comfortable they are being turned into living rooms”.

They say drivers should be restricted from using certain non-essential forms of technology while the vehicle is in motion, and car makers should not introduce any technological development which takes the driver’s attention off the road for longer than two seconds.

These voluntary guidelines are to be phased in over the next three years to address this large-scale problem in the USA.

US Federal data figures showed in 2011 that accidents involving a distracted driver killed 3,331 people and injured another 387,000.

Sillars said: “We cannot allow the same trends in the USA to happen here. While car makers work constantly to incorporate active and passive safety features into vehicles, making us safer than ever before, they are also guilty of making us too comfortable and making us feel more cosseted – like we were in our own living rooms.”

She concluded: “Technology could be a great way of helping to cut the numbers of people killed and seriously injured on our roads. It would be a tragedy if technology became a reason why more, rather than less, people lose their lives.”