Hyundai unveils i30 hatch ahead of 2017 launch

Hyundai’s third-generation i30 hatch will go on sale in the first half of 2017, with CO2 emissions from 89g/km and a focus on driver appeal across the range. 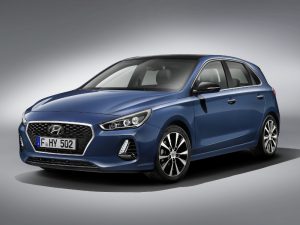 The i30 hatch will go on sale early next year

A core part of the brand’s aims to be Europe’s number-one selling Asian brand, the i30 was designed and developed at Hyundai’s technical centre in Russelsheim, Germany and will be built in the Czech Republic.

There will be three versions – a five-door hatch and estate, as in the outgoing model, and a coupe with a silhouette closer to the now-discontinued Veloster than the current three-door hatchback.

The hatchback is longer, lower and wider than the outgoing model, but over the same wheelbase, and gets a stiffer, lighter bodyshell with increased boot space. Launch dates for the coupe and estate have not been announced yet.

Technology-rich, a touchscreen infotainment system and reversing camera are standard equipment, and all versions get autonomous emergency braking. Depending on trim level, standard features include wireless charging for phones and tablets, the internet-connected TomTom LIVE information services, Apple and Android smartphone integration

The launch range will include three 1.6-litre diesel engines, with 94bhp, 108bhp and 131bhp, the latter two available with a seven-speed dual-clutch transmission (DCT). Depending on trim level, all of them emit less than 100g/km. Petrol options start with the 99bhp 1.4-litre MPI, joined by 1.0-litre and 1.4-litre turbocharged units producing 118bhp and 138bhp respectively. The DCT is only offered on the most powerful version.

Hyundai will also offer Eco versions of selected engines, which are aerodynamically optimised and feature revised gearing. The 108bhp 1.6 CRDi is the most efficient model in the range, at 89g/km, while the 1.0 T-GDI Eco and 1.4 T-GDI Eco petrols emit 103g/km and 109g/km in their most economical versions. All figures are subject to final homologation.

The trim line-up is not finalised, but Hyundai UK president and CEO, Tony Whitehorn, indicated that it is likely to include entry and top-level versions, and a mid-spec SE model offered with or without navigation that’s expected to take the bulk of fleet volume.

Eco versions will be available for all trim levels, though larger wheels affect the CO2 emissions, and there will be a hot hatch developed by the N division as a halo model, as well as hybrid or electric drivetrains later in its lifecycle.

Further details of the new i30 are expected at the Paris Motor Show at the end of the month, with pricing to be announced towards the end of the year.

Previous: New Peugeot 5008 to compete in large SUV segment
Next: 43% of drivers have left car keys with a stranger