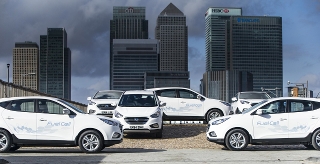 Available to order immediately, the vehicle is part-funded by HyFive – a European project that aims to deploy 110 fuel cell electric vehicles (FCEVs) from the five global automotive companies that make up the HyFive consortium, which includes Hyundai.

The ix35 Fuel Cell is equipped with 134bhp electric motor, allowing it to reach a maximum speed of 100mph. Two hydrogen storage tanks, with a total capacity of 5.64kg, enable the vehicle to travel a total of up to 369 miles on a single fill, and the carmaker says it can reliably start in temperatures as low as minus 25 degrees Celsius. The energy is stored in a 24kWh lithium-ion polymer battery, jointly developed with LG Chemical.

The ix35 FCEV prices have been revealed as Fuel Cell Systems Ltd (FCSL) has announced that it has been awarded government funding for a mobile hydrogen refuelling station (HRS). The funding comes from the Department for Transport (DfT) via the Office of Low Emission Vehicles (OLEV) and covers the integration, supply and operation of the refueller.   The project is one of four new hydrogen refuellers to be commissioned by the Department for Transport (DfT), with two to be sited in London and two mobile units to be built that can be deployed in line with demand. The £5.5m funding will also be used to refurbish a further four existing refuellers.

Tom Sperrey, managing director of Fuel Cell Systems Limited, commented that “the provision of refuelling facilities is a necessary complement to the take-up of emissions-free fuel cell vehicles. This in turn makes the benefits of fuel cell technology available direct to the consumer. As Europe’s ‘go-to’ supplier of fuel cell consultancy and product, we’re delighted to be able to contribute to this keystone initiative”.