Hyundai and Ineos are to cooperate to help accelerate the development of hydrogen technology, potentially including a hydrogen-fuelled version of the Ineos Grenadier offroader. 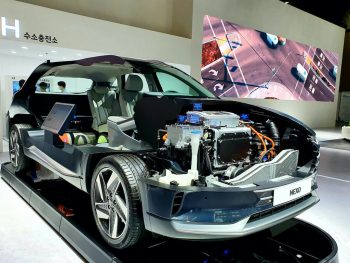 The memorandum of understanding will see the two firms investigate opportunities include production and supply of hydrogen as well as new hydrogen applications, technologies and business models.

The two companies will also work together to explore the use of the Hyundai fuel cell system – already seen in the Hyundai Nexo SUV – for the recently announced Grenadier 4×4 vehicle.

Hydrogen is a key part of the Hyundai Motor Group’s mid- to long-term roadmap, Fuel Cell Vision 2030, which was announced in 2018 and sets out plans to increase annual production of hydrogen fuel cell systems to 700,000 units by 2030.

Ineos has also said that through its Inovyn subsidiary, its experience in storage and handling of hydrogen and electrolysis technology enables it to drive progress towards a carbon-free future based on hydrogen.

Peter Williams, technology director Ineos, said: “The agreement between Ineos and Hyundai presents both companies with new opportunities to extend a leading role in the clean hydrogen economy. Evaluating new production processes, technology and applications, combined with our existing capabilities puts us in a unique position to meet emerging demand for affordable, low-carbon energy sources and the needs of demanding 4×4 owners in the future.”