By Natalie Middleton / 10 months ago / Features, Top Stories / No Comments 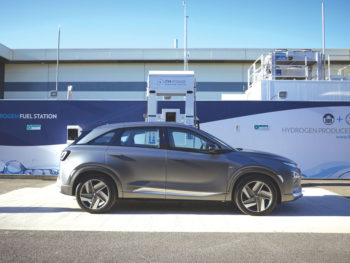 The Hyundai Nexo is the replacement to the ix35 FCEV

Hydrogen has been back in the headlines in recent weeks, with developments including Hyundai’s Nexo hydrogen fuel cell electric vehicle (FCEV) going on sale, not long after Hyundai Motor Group said it’s planning to build up to 500,000 FCEVs per year by 2030. Meanwhile Arval is to run a series of roadshows to raise awareness of hydrogen cars. And niche hydrogen car maker Riversimple has embarked on its third crowdfunding round to get its Rasa two-seater into Beta series production.

But after years of bold claims that hydrogen is the fuel of tomorrow, is it looking likely that it’ll ever become the fuel of today?

According to Gary Harrison, head of engineering at BT Fleet Solutions and specialist in alternative fuels, it’s a simple yes.

“People talk to us about the inefficiencies of hydrogen, but it will be like any product – it will develop at the rate government or industry invest in the development of hydrogen production.

“I very much see hydrogen as being the fuel, or definitely one of the fuels of the future – certainly for the heavy duty and longer-range requirements of society once a lithium-ion or alternative battery technology is limited to that range. At the moment manufacturers are putting more and more weight into vehicles to give them more battery capacity for increased range. Hydrogen effectively removes that.”

Meanwhile, Arval, whose knowledge of fuel cell technology derives from its major involvement in a Swindon-based research project called the Hydrogen Hub, agrees that purchase price needs to fall while the infrastructure needs to improve, and it says that with the right backing, the demand for hydrogen will increase.

Senior business manager Paul Marchment says: “Our experience is that, once people know more about hydrogen technology, they are more likely to adopt and champion it. In the future, we hope to see it being used alongside a range of other fuel choices including EVs, PHEVs, petrol and diesel, helping our customers match each to their needs.”

But Felipe Munoz, global automotive analyst at Jato Dynamics, says that as well as infrastructure and high purchase prices, FCEVs face further hurdles, including that their popularity still depends on one market: Japan, where they are really investing on this fuel type. The big markets, such as China and Europe, are focused on electrics, whereas hybrids are big in India.

He adds that so far, investment announcements have come more from carmakers than from governments.

It’s a view that Dr Graham Cooley, CEO at ITM Power, agrees with, particularly when it comes to the UK. He explains: “The UK government has invested 30x more into battery charging infrastructure than it has into hydrogen refuelling infrastructure. The UK Government claims to be technology agnostic, but has clearly created an un-level playing field for plug-in electric vehicles over fuel cell electric vehicles.

“The key step for the mass market adoption of hydrogen is the rollout of a critical mass of hydrogen refuelling stations funded by the UK government. The Government’s publicly stated target was 65 stations by 2020, this is now a missed target.”

So when will hydrogen cars really start to take off in the UK? Well, BT Fleet Solutions’ Gary Harrison says a couple of things will determine that.

“The first one will be that I think the Government will continue their focus on battery EVs. That almost has to continue its journey and get that to a point of acceptance nationally and at that point, they will then start to solve the problem of extending the length of journeys. Once you’ve solved the problem on inner cities and clean air zones, all of which need a solution now which is where the BEV is really taking off, that’s when the Government will look for a solution to remove all internal combustion engines from the market.

“I expect over the next five to 10 years, we will see a gradual shift of focus onto alternative fuels that solve the longer-range, heavy-duty problem. In the meantime, you’ll have these niche companies that will continue to develop and improve the technology to make it easier for the Government to start investing larger sums of money in infrastructure and the technology.”