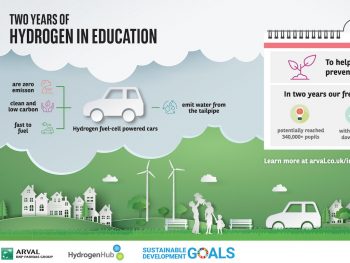 The hydrogen education pack is now used in schools across the country via the TES website and has potentially reached around 340,000 pupils in less than two years

Launched in March 2019 in partnership with Arval UK, Ecuity and the Hydrogen Hub partners, the pack was initially trialled in Swindon at the Nova Hreod Academy, amongst others.

It’s now used in schools across the country via the TES website and has potentially reached around 340,000 pupils in less than two years.

Nova Hreod Academy head of science, Dr Jannine Clapp said: “Having the opportunity to see first-hand how technology can be used for cars in a real-world application was a real bonus for our triple science students. The lesson plan along with the excellent resources for schools, created by Arval, Hydrogen Hub and Fuel Cell Systems, have helped support our scientists of the future, even whilst teaching online this year.”

Arval UK said it’s work to educate the next generation on the new technology has been run in parallel to offering hydrogen fuel cell-powered cars to customers.

Paul Marchment, business manager at Arval UK, said: “We have more than 175,000 vehicles on our UK fleet and our customers are rapidly adopting zero-emission technology such as electric cars, vans and a small number of hydrogen fuel-cell powered cars too.

“The key to normalising zero-emission technology lies as much with the next generation as the current one and so helping students to learn about hydrogen as a viable method of powering vehicles – as well as its other benefits – is something we’re proud to support. The pack being downloaded more than 30,000 times, with more than 18,000 in the last year, is incredible.”

Previous: AFP to launch Tax Manifesto at new webinar
Next: Fleet Supplier of the Week: Rearguards